The Western world seems to be in the grip of Zhang Yimou hero-worship… ok bad pun, but with the release of Hero (Ying Xiong) and then House of Flying Daggers in short succession, it seems you can’t turn anywhere without hearing yet another reviewer raving about his visual style and artistry. Unfortunately, House of Flying Daggers doesn’t live up to the hype.

Set at the end of the Tang dynasty, we are told the story of civil war – the government vs militia groups, one of which is the ‘House of Flying Daggers’. The effect of the war is explained to us by the story of two local police captains, played by Kaneshiro and Lau, and the dancing girl Mei, played by Zhang Ziyi. With increasing complexity of relationships, as these three bring their own stories to a climax, so does the final battle between government and militia occur. Yimou builds layer upon layer of allegiances and counter-allegiances, confusing the issue completely, until eventually you know only one thing for sure – with three people in love with each other, someone has to lose, and maybe the fate of their people rests with that outcome. This is a complicated film, with rich symbolism getting prominence alongside Yimou’s usual visual feast – once again, Flying Daggers is stunning to look at. The scenery, the action set pieces – all are bathed in bright colours and often gorgeous slow motion effects. There are times when the scenery is a little too coloured, a little too amazing – moments when I heard Stuart snorting beside me as yet another incredible, but improbable vista was displayed. That being said, if you like seeing colour and nature displayed in all its glory, this may be for you.

The martial arts scenes are at times awesome. Much has been made of the ‘Echo Game’ piece, and the fight in the bamboo forest, so I need not elaborate further, other than to say these almost carry the film. The bamboo forest is particularly amazing. That being said, there are some laughable CGI graphics, and the blood was abominable… Cottee’s Raspberry cordial anyone?

What lets this film down is the failure to give the three protagonists any real life – they are sketches of people only. Although Ziyi does her best, Lau is burdened with minimal character data, and yet he’s supposed to be both a figure of pity and scorn. My failure to relate to his three stars left me somewhat uninvolved, disappointingly – Yimou may have needed to cut one of the fight scenes out in favour of more detailed characters.

By the end, which takes a while to come after 119 minutes, I was a little tired of trying to stay involved, wanting to be moved. I hadn’t been, Yimou had lost me along the way, and the resolution didn’t affect me nearly as much as it should have. I was disappointed by the ending – some have described it as anti-climactic and I’d agree.

While beautiful to look at, House of Flying Daggers doesn’t have the intimacy of Yimou’s The Road Home (Wo de fu qin mu qin) which I had seen and loved earlier this week. It is a similar film to Hero (Ying Xiong) – lots of style but lacking in substance.

Another overblown, self indulgent epic from Yimou Zhang, once again without a strong plot to back it up. Let me save you some time. I didn’t dig this movie. 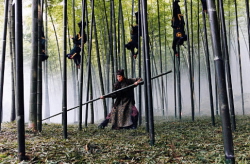 Yes, House Of Daggers looks amazing. And, much like Hero (Ying Xiong), the action scenes are awesome (and occasionally silly). But once again I simply couldn’t get close to the characters. They walk around apparently in the midst of some grand romance, but I don’t actually see it in action. Why should I care about these people? Why should I believe that they’re meant for each other? Apart from the fact they can defy the laws of physics and occasionally say things like ‘You are drunk and indecently dressed!’, there was nothing for me to invest in.

Credit is due to Shigeru Umebayashi, whose score is fantastic. At times the music was so poweful that I felt shamefully emotional about these characters I didn’t give a crap about.

House Of Daggers is waaaaaaaaaaayyy too long. On five separate occasions I was expecting the final fade to black, only to have the film chunder on for another half hour. At times the audience laughed at the ridiculousness of the situation as the film got sillier and sillier.

If you’re going to see this film, see it on the big screen. At least if you’re bored in between the fight scenes you can go ‘ooohh, pretty!’ If you dug Hero, you’ll probably like this one too. I just wish Yimou Zhang would make a film with a decent story. Maybe I’ll take note of Mark’s The Road Home (Wo de fu qin mu qin) review, and hire that…

If you’re after a good period action piece with a decent story, somehow go and see Sword In The Moon (Cheongpung Myeongweol).