It’s nice to see that this film finally saw the light of day (or at least the dim light of a cinema). I had heard that Rob Zombie was making this film many many years ago, and of course his song ‘House Of 1000 Corpses’ came out almost about two years before I even got to see this one at the cinema. 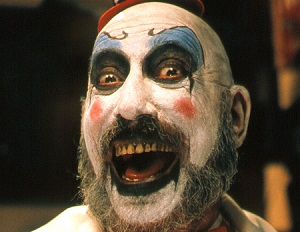 It’s always been supremely evident that Mr Zombie has a thing for schlock horror, so it’s no surprise that he ain’t too bad at making a horror movie himself. House Of 1000 Corpses has some great acting (Sid Haig is brilliant), a reasonable script, but above all looks fantastic. Very much a product of the MTV school of filmmaking, House Of 1000 Corpses features some snazzy editing and impressively OTT production design and lighting. There are some very cool shots in this film.

The story is a kind of hodgepodge of classic horror stories, particularly reminding me of the original Texas Chainsaw Massacre, Vampyre (Vampyr – Der Traum des Allan Grey) and more recently The House On Haunted Hill remake, Dagon and Jeepers Creepers. It has a very broad focus and does its best to contain all the best elements of the different sub-genres of horror. The plot often plays second fiddle to the gore (which is mostly inferred, although it’s blatantly obvious that this film has been chopped to bits in favour of an acceptable classification).

During this film I found myself thinking that this could very well become a classic. It has all the makings of attaining a very high cult status, although I’m not exactly sure how this process works. It certainly disappeared from our screens quickly and is bound to become a favourite among horror movie collectors. I’ve also heard whispers that Rob is planning on releasing an uncut version (although surely it would have to be ‘less cut’), which could surely have people flocking to their DVD stores to see or even purchase the film.

House Of 1000 Corpses only lets itself down with an ending that is so typical and unsurprising that it makes you wonder if Rob simply gave up. The rest of the film is a colourful, fetid monstrosity of a film that never really lets common sense get in the way of a bit of gore (and I mean that as a complement).