The team that brought us Shaun of the Dead has created a worthy follow up with Hot Fuzz. Whereas Shaun was the ultimate zombie movie pisstake, Fuzz is a mixture of parody and homage. Writer/director Edgar Wright and writer/actor Simon Pegg clearly have a love for action movies, and it shows. The film not only includes snippets of Point Break and Bad Boys II, but does its best to duplicate and in fact out-do the action movie clichés we may or may not be aware of. We’re not just talking about flying through the air firing guns or jumping away from explosions – it’s also the little things. For instance whenever someone takes a photo the noise of the flash must be a shocking reverberation, and if someone ever steps up to a microphone there’ll be a moment of ear piercing feedback. Hot Fuzz positively revels in such action movie minutiae. 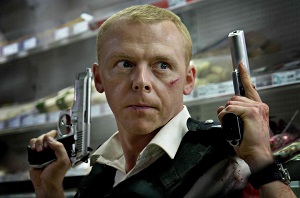 The script is fantastic. There are absolutely no dud moments in this film, despite its rather inflated running time (the climaxes have little climax children of their own, it gets wonderfully silly), and the jokes fit seamlessly alongside the characters and narrative twists and turns.

The film has the biggest British cast this side of Harry Potter, and in the first three minutes alone we get Simon Pegg, Martin Freeman, Steve Coogan and Bill Nighy in a room together. Bill Bailey, Jim Broadbent, Edward Woodward, Paddy Considine, Timothy Dalton and Stuart Wilson (not related) all appear at one time or another to join Pegg, Nick Frost and other familiar faces from Shaun. Even better, there’s no grandstanding, and all of the actors seem to know their place, which is fantastic.

The editing is practically an extra character in this film, courtesy of Chris Dickens. Regular montages feature rapid fire edited sequences that perfectly capture the idiotic bravado and self importance of the average Hollywood action blockbuster. It does become a little tiring after a while (and especially considering the sound was way too loud in the cinema during my screening), but it’s certainly powerful aspect of the film.

My only complaint with Hot Fuzz, I guess, would have to be the lack of interesting female characters. The only two of any significance are both simply relegated to ‘slut’ roles, and whilst action movies have a proud history of treating women like crap, it doesn’t seem like they were deliberately sending this up here. Rather, they simply didn’t write a screenplay that included women.

It’s hard to anticipate what this team will do next. Hot Fuzz also dabbles in both the horror and western genres, though it’s impossible to say whether they’d explore those realms further. Suffice to say I’ll be looking forward to whatever they do next.

At the risk of once again being labelled as anti-comedy, I have to admit to being underwhelmed by the second film featuring the combined talents of Edgar Wright, Simon Pegg and Nick Frost. Their first outing, Shaun of the Dead, was a (mildly) amusing spoof of both zombie movies and British society in general, and in attempting to follow that with a new twist on ‘buddy cop’ films, they are often more miss than hit.

As the number one cop in London, Simon Pegg’s Nicholas Angel is a constant embarrassment to his peers. He is committed and obsessive, and lives his life for the Police Service. Sent away against his wishes to be the new Sergeant in the picturesque village of Sandford, he rapidly begins to suspect things aren’t as perfect as he thought. Teamed with PC Danny Butterman (Nick Frost), the inept son of the local police chief, life in Sandford is one frustration after another for someone so efficient.

All the archetypes of the British village drama are present, as they should be in a satire on just those shows. 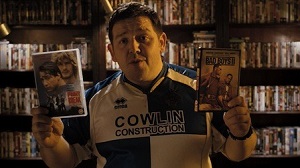 Hot Fuzz is similarly filled with references to its other target – buddy cop Hollywood action extravaganzas – and is this respect it is less than impressive. Much of the humour is telegraphed from afar or completely over-worked, such that some moments of parody are tired before their eventual punchline. The Point Break references in particular belong in this category, with the characters discussing the moment, then watching it on dvd, before finally living it out themselves in what is a rather unsubtle and heavy-handed approach to setting up the joke.

For what is essentially a spoof film, the running time of 121 minutes is excessive in the extreme. Much of the midsection is unneccessary and bloated, and perhaps with judicious editing down to a more contained 90 to 100 minutes (like Shaun, which clocked in at 99), Hot Fuzz would not feel so like a marathon. The attempt to give some of the supporting characters more depth is wasteful given what becomes of many of them, and only contributes to further prolongation of the film beyond its naturally sufficient length.

That Pegg and Frost work well together is obvious, and their chemistry is one of the film’s few real strengths – Pegg, the natural leader and straight man, and Frost, the perfect screw-up and comedic foil. Whether this dynamic can last much longer is another question, for after two feature films this will start to get dull sooner rather than later. The presence of many of Britain’s A-list stars does not change the fact that this is essentially a vehicle for two guys to do their thing again, and most of the supporting cast must only have agreed to their roles as an opportunity to share the screen with those perceived as fresh and cool. Jim Broadbent is the only one to get any real meat on his role among a cast of caricatures.

There are moments that work, but these are scattered among overly long sections of little interest. Certainly not the amazing film that many reviewers are claiming, (including the one above), it may well be enjoyed by those who loved Shaun, more for the chance to see Pegg and Frost together again rather than on merit. This is a shame as some of the material on show has significant potential.