I had been moderately excited about this CGI revisionist fairy tale, but unfortunately Hoodwinked misses the mark. The first half is pretty darn good, and whilst not hilarious, has enough moments to chuckle at. We witness the story of Little Red Riding Hood from four different perspectives, Rashômon-style. Unfortunately, the film then leaves the fairytale format and tries to out-climax films like Toy Story or even the more recent Over the Hedge. The best the writers could come up with is a pretty ho-hum conclusion that moves vaguely into James Bond spoof territory without being the least bit exciting. 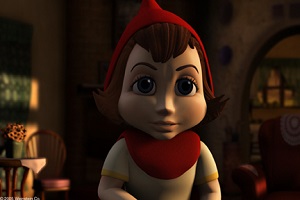 It’s a pity because there are a plethora of possibilities in the fairytale spoof genre, especially considering Shrek 2 wasted so much of its screentime on more general movie parodies.

Hoodwinked clearly had a smaller budget than Dreamworks Animation’s or Pixar’s films do, and this is only a problem when it comes to breathing life into the characters. Red Riding Hood (voiced by Anne Hathaway – Brokeback Mountain) looks like she belongs in a stop motion show like ‘Noddy’ rather than a slick big screen animation.

The voice talent is adequate without being exceptional, though again the sub-par character animation doesn’t help. Glenn Close, James Belushi and Xzibit all chip in, however David Ogden Stiers is the only one who makes his role memorable as Nicky Flippers the frog detective. The film contains several musical moments, but they only exist as parodies. The soundtrack songs are good, and ‘Red is Blue’ should get an award if only for the central pun.

It felt at first as if I were watching a stage play, rather like Stephen Sondheim’s ‘Into the Woods’, and if Hoodwinked had stuck with that format it may have been better off. As it stands the film is a big disappointment, with occasional glimpses of what it could have been.

←Jindabyne You, Me and Dupree→