Home Room is an interesting film. It doesn’t consistently succeed on many levels, but it has its redeeming moments. 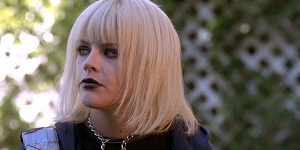 Firstly a very strong sense of ‘midday movie’ pervades here, much like My First Mister. It pushes the schmalz and emotion just a bit too hard in its efforts to make you feel sad. It took me a while to warm to Busy Phillips’ performance, but Erika Christensen was fantastic. Through Traffic, Swimfan and now Home Room it’s been great to see Christensen’s range – she’s quite a versatile actress. There’s also a pre-Blue Car Agnes Bruckner, who already shows signs of her immense talent.

Victor Garber seemed a little out of place here, and in fact the first ten minutes or so were shockingly bad, police walking around delivering wooden and unrealistic lines.

The DVD cover of this film looks like a horror movie, which is why I passed it so often in the rental store, but after seeing the trailer I decided it would be interesting to see how it tackled the issue of school shootings in comparison to the brilliant Elephant. Well, as I said, this is much more a midday movie, so it really only seems to use the shooting as a background for some good old schmalzy tear jerking moments.

There were moments of brilliance here, but they were only fleeting. A lot of the problem lay in the writing, which was at times clunky and awkward. That being said, I did enjoy this film. The resolution came a little out of left field, and again, I think a better writing job could have made for a smoother climax.