Nancy Meyer’s film starts out pushing all the right romcom buttons – work addicted Iris barely even has time for the office Christmas party, so dedicated is she to her job. Pretty enough but clearly the cinema’s version of ‘plain’ she is still hung up on Jasper when disaster strikes in the form of his engagement to another colleague. Reduced to a sobbing wreck, Iris has such a stereotypical introduction I’d be willing to leave the cinema if she wasn’t being played by Kate Winslet. She’s one of those A-class actors that manage to make even the most clichéd role memorable. 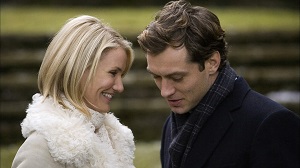 In fact the majority of the cast of The Holiday are brilliant. As unlikely as it sounds, Jack Black is a fantastically charming man when not singing ‘Fuck Her Gently’ as part of his other job in Tenacious D. He’s completely convincing as the self-deprecating yet passionate film composer. Jude Law also has a surprisingly refreshing turn as Iris’ brother Graham, and Eli Wallach is wonderful as the has-been screenwriter Arthur Abbott, who is perhaps more relevant to contemporary society than he gives himself credit for.

The only blemish on The Holiday’s otherwise charming exterior is Cameron Diaz, who unfortunately isn’t up to the task as Amanda. As Iris’ American equivalent it’s Amanda’s hatred of men (and Edward Burns in particular) that leads to her to agree to a cross-Atlantic house-swap with her. I’ve never had a problem with Diaz, and she was well suited to films like Charlie’s Angels and There’s Something About Mary, however her kind of hyperactive ‘extreme acting’ really doesn’t fit well into the rest of The Holiday. Whereas Jack Black toned down the over-the-top antics we were used to from High Fidelity and The School Of Rock, Diaz sadly seems to be out of kilter with the general mood of the narrative.

The script is decent, and any of its shortcomings are more than made up for by the skill and general charm of Winslet et. al. The Holiday is the type of safe cutesy feel-good film you expect around Christmastime, one where you know nothing too nasty is ever going to intrude on the make believe lovey-dovey world.

Trumpeted in its own marketing material as the new Love Actually, The Holiday suffers from a dull script and generally dull performances, and could perhaps be better described as Dull Actually. It is only the addition of another character to the starring foursome that gives this any kind of life at all.

Sporting a premise that promotes predictable and safe ahead of interesting or challenging, The Holiday never involves the audience in the way a good romantic comedy should. 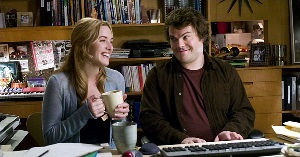 Featuring an artificial set-up – two women getting over bad relationships swap houses and fall in love with men from the others’ life – it is all warm and fuzzy and, well, boring. There is never any question as to the outcomes for any of these characters, and no real bumps in the journey. Sure, there are several moments in which character data are revealed that may challenge or discourage their enamoured, but truly, it all feels so predictable.

Kate Winslet can surely do better than the B-grade material she is forced to endure here – she gives as much as she’s got within the limitations of a stereotyped character with disappointingly clichéd reactions to her love life. Paired off with Jack Black, their developing relationship is at least watchable, but the Cameron Diaz / Jude Law coupling is tired and mundane, and neither is even remotely inspiring. Diaz in particular is ill-suited here, and is at times almost unbearably difficult to relate to, or even watch.

The only charm in this otherwise drab affair comes about at the hands of Eli Wallach, the 91 year old former star of The Good, the Bad and the Ugly and The Magnificent Seven, whose entrance is the salvation of Winslet – finally she is lent some spark, and their shared scenes are ones to savour. Although his rehabilitation occurs far more rapidly than is likely, his eventual realisation of his own value is the only moving moment in The Holiday. That that could be said about a subsidiary character and not any of the four leads is an indictment more on the writers than the cast.

Sure, The Holiday is warm and snugly, but in the end, one doesn’t actually care enough about the outcome for these people. Winslet makes her Iris appealing enough, and the audience does want her to come out of this well, but the sensation of watching Law fall for Diaz is one of watching a car wreck – you know it’s gonna happen, and you wish you could stop it, at least for the sake of Law’s character who does have one or two good features and does not deserve to be caught up in the debris.