When it comes to Peter Jackson’s The Lord of the Rings trilogy, I have a different opinion than most. My ranking, from best to worst, is as follows: The Fellowship of the Ring, The Return of the King and The Two Towers. Anecdotally speaking, there were a lot of people out there that found Fellowship tedious, but I love that film. I have a feeling the same thing is happening with The Hobbit. An Unexpected Journey was a delight for me, and probably my second favourite Tolkein/Jackson film overall. When it comes to The Desolation of Smaug however, a film that audiences seem to agree is better paced than the first film, I’m slightly disappointed. 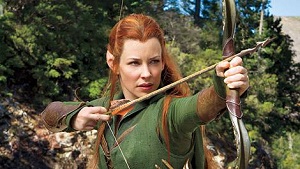 Don’t get me wrong; there’s a lot to like here. Once again, Middle Earth has been beautifully brought to the big screen, and once again we have some brilliant performances peppered throughout the bloated running time. But, for me, The Desolation of Smaug felt too long and occasionally bordered on tedious, something that never happened to me in the first film.

Bilbo (Martin Freeman), Gandalf (Ian McKellen) and all the dwarfs are still making their way to the Lonely Mountain, and there are still a bunch of orcs on their trail. Again, we have more characters than the film really needs – I swear at least five of the dwarfs get a single line each – and the screenplay strays outside the original source material in an attempt to paint a broader picture than Tolkein’s initial fairy tale-like novel.

The padding really starts to feel like padding too. I applaud Fran Walsh, Philippa Boyens, Guillermo del Toro and Jackson for creating a new female character, but at the same time it’s hard to shake the knowledge that her role is extraneous. Evangeline Lilly plays Tauriel well, but for me the film more often than not felt stilted when both she and Legolas (Orlando Bloom) shared the screen.

Other new faces are welcome. Stephen Fry immediately makes any film better, whilst Benedict Cumberbatch’s Smaug is a perfect marriage of human performance and CGI wizardry. Smaug’s scenes are utterly flawless and worth the price of admission on their own. Naturally, this wouldn’t be possible without Freeman, whose naturalistic portrayal of Bilbo well and truly grounds the film.

The fact that Bilbo isn’t front and centre of the narrative in this film is probably one of the biggest problems. The Desolation of Smaug is more of an ensemble piece, and some characters simply aren’t as good as others. If you liked An Unexpected Journey but felt it dragged in places, then you’ll probably be more impressed with this outing, where Jackson pulls out all the stops to create a brilliantly fantastical fun-filled adventure. However, if you preferred the kind of dynamics present in the first film rather than a non-stop rollercoaster ride, then you may find this sequel quite tiring.

The Hobbit: The Desolation of Smaug