As is often discussed, the conversion of one form of art to another is fraught with difficulty. First there will be those who criticise you for not being true to the original form, then there will be others who say you haven’t embraced the new one. This has been something I’ve thought about a lot in recent years – The Lord of the Rings trilogy, with its years in production, gave me ample time to consider how I would feel about my most beloved novels being made into films. Many criticised Peter Jackson for leaving out their favourite elf, or changing events slightly, while others lauded him for staying true to Tolkien’s original vision, but adapting it to make effective movies. The recent spate of comic book adaptations has also added much fuel to this debate. And now comes another well-loved British series of novels transformed for the big screen. What many forget, is that there has never been a definitive version of The Hitchhiker’s Guide to the Galaxy. Originally a radio play, then also a trilogy of five novels and a television series, a movie was inevitable. As was the criticism that would flow after its release. There has been hysteria, and vitriol, and much angst. So I decided I could only measure its worth using two criteria:

1. How faithful is it to the feel of the books? To Adams’ vision, style and plot?
2. Is it an enjoyable movie?

Using these criteria, I can say that The Hitchhiker’s Guide to the Galaxy is a pretty good attempt.

The film opens much the same as in the novels, with Earthman Arthur Dent being woken by the sound of bulldozers wanting to knock down his house. In short order, he is whisked away from certain death to adventures across the galaxy, by his good friend, Ford Prefect. Meeting up with the girl he never had, Tricia McMillan (Trillian), and the guy who made sure he hadn’t, President of the Universe, Zaphod Beeblebrox, they find much excitement, and eventually get to the bottom of it all.

Along the way, there is much of Adams’ sidetracking, amusing anecdotes, and bizarre absurdities. Narrated by Stephen Fry, the sections from the eponymous Hitchhiker’s Guide are amusingly illustrated, allowing the director to convey much of Adams’ flight-of-ideas approach, without detracting from the film or its pacing. This is no small feat – I had worried that much of Adams’ original dialogue and description would be lost, it being so wordy at times, but it is faithfully reproduced here. Not a complete, word-for-word representation of the novels, but in touch with the mood, and the feeling of reading them, and with enough direct quotes to satisfy almost all of the purists. In this respect, the filmmakers have a major achievement – conveying Adams’ wit without sidetracking too much for a film-goer, this was walking a tightrope, but an inspired effort. Whether they met criteria two? Well, I didn’t fall immediately in love with this film, as I had done so when I first read the novels, but it was certainly enjoyable.

The action moves at a rapid pace, although the abovementioned sidesteps and distractions do allow time for what has occurred to sink in a little, before you’re zipping off again. Obtuse at times, the plot may stretch some viewers, but probably many who would struggle wouldn’t be interested in seeing it, whereas those keen to see it probably will find it easy to follow. Clear? I guess I’m saying that this isn’t a straightforward Hollywood creation, and many viewers will find it hard to accept this British way of doing things. It requires some patience, a taste for the bizarre, and a willingness to enjoy the weird and wonderful ideas that flow steadily from the screen.

I will be interested to see how this film fares in the USA, given it is so very British. It is not a readily accessible popcorn flick, in spite of appearances. If you are prepared to put in a little cerebral effort, there is a lot to be gained. Very enjoyable, hilarious at times, and always interesting, The Hitchhiker’s Guide to the Galaxy is well worth it.

I must say that I’m not the biggest fans of Douglas Adams’ series of novels. I have read the first three of them and whilst I chuckled at the adventures of Arthur Dent, I didn’t love them. So it probably isn’t that strange that I didn’t love the long-awaited movie.

A lot of Adams’ humour is in the narration rather than the dialogue, thus The Hitchhiker’s Guide to the Galaxy worked best when Stephen Fry was actually narrating sections from the aforementioned guide. I loved these interludes and wished there could have been more, because the rest of the time I barely laughed. Whilst the source material features many cases of brilliantly skewed logic, overall the feature film seemed simply ‘wacky’. 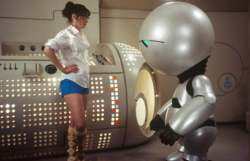 What’s most annoying is that The Hitchhhiker’s Guide to the Galaxy wasn’t bad in the way I expected it to be. I had predicted that the studio machine would ruin the book by Hollywood-ising everything, but the issues I had with the film were far less tangible. It’s hard to keep the TV series out of mind, but in the first few scenes we were moving at such a breakneck pace that I had difficulty getting involved. Not to mention the fact that Mos Def’s dialogue was at times completely indecipherable. The pacing of the whole film doesn’t follow traditional comedic conventions… rather sprays its humour haphazardly about without any sense of rhythm. Strangely enough it was only really the last half hour that worked for me. Yes, there is a romantic subplot that will probably piss off a lot of die hard Adams fans, but it was beautifully done, and I loved the idea of using Adams’ point of view gun to further the narrative.

The performances were fine, but often dwarfed by the special effects (Bill Nighy had trouble making an impression over the fairly significant background activity). Apparently Zooey Deschanel is a big Hitchhiker’s fan, and I think it showed here, even if she’s the least crazy character. As usual, I couldn’t stand Sam Rockwell, and whoever did the terrible special effects for his extra head and limbs should be shot. Mos Def does well running about like a lunatic, but was in need of some serious directing.

I simply didn’t laugh enough. It was spectacle, pure and simple, and fascinating to see how they transferred the novel to screen – but I didn’t really like the result. There were high points – Bill Bailey’s whale being one of them, but overall I was disappointed.

I have since spent a lot of time wondering if this film is a good indication of how an adaptation of Terry Pratchett’s Discworld novels will turn out. Those books are a lot closer to my heart than Adams’, basically cos I consider them to contain similar humour to Hitchhiker’s except with some plot to go with them. I’m hoping that when Discworld is finally made it will be much better than this disappointment.

←In My Father's Den Garden State→

The Hitchhiker’s Guide to the Galaxy