A rather incongruous film to be remade, 2007’s The Hitcher more or less covers the same ground as the original. This version boasts a slightly bigger budget (and features some out-of-place CGI effects) but suffers from the same problems as the 1986 film. The screenplay mixes up some of the events in the second half of the film, but all in all this is a pretty faithful remake. 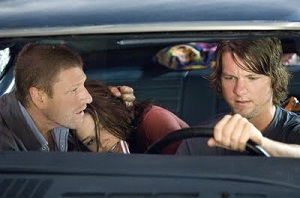 Sean Bean sits in for Rutger Hauer and fills the role well enough. (Though why anyone would pick up Sean Bean is a bit of a mystery – haven’t these people seen his films? He’s almost always the bad guy!) Sophia Bush and Zachary Knighton play the hapless victims of John Ryder’s deadly game with aplomb, and they’re certainly easy on the eyes. Neal McDonough has a woefully underdeveloped role which is a pity since I hadn’t seen him since Walking Tall.

The main problem is that the original Hitcher was a very silly film – Ryder had almost supernatural powers and the uncanny ability to be everywhere at once. As a dusty old video I found in the back of my rental store it was a fine way to spend a lazy afternoon, but as a 2007 remake we need something more. This would either mean upping the silliness to epic proportions, or taking a more serious and/or intelligent path. Alas, Dave Meyers’ film does neither, and simply feels like an 80s throwback unwilling to capitalise either on new technology or edgier developments in Hollywood storytelling. Pretty much the only thing this remake can offer that differs from the original is the inclusion of the Nine Inch Nails’ song ‘Closer’, which always improves the quality of a film.

Unless you’re a die hard horror movie completist, give this a miss. Even better, hire 2001’s Roadkill (Joy Ride) instead. It’s about time Hollywood realised that we need new films, not more remakes. I’m hoping things won’t get so dire that they remake Hauer’s Wedlock – as great as that movie was, it deserves to be left back in 1991.