Equal parts brilliant and infuriating, Michael Haneke’s psychological thriller grabs you from the opening moments and refuses to let go until the credits roll. Hidden is bound to be one of the most talked about films of the year. 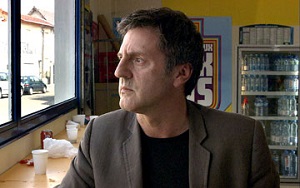 This psychological thriller effortlessly manages to question the dichotomy of dream and reality, and that which lies in between – the recorded image. The film starts with a similar premise to Lost Highway, but while David Lynch’s film went off on wildly Lynchian tangents (such as body-swapping and backwards exploding houses), Haneke’s sticks with it til the very end.

An indescribable sense of foreboding looms over proceedings, and no matter whether the setting is filled with light or drenched in shadows, we constantly bear witness to a sparse and empty world. TV host Georges (Daniel Auteuil – 36 Quai des Orfèvres) presents his chat show against a backdrop of a thousand fake books lining bookcases, and then goes home every day to a room with similar furnishings to watch the TV. The illusion he creates, his day to day life and the history in which he is complicit are one and the same. Auteuil gives his best performance yet as a man haunted by the lens and constantly looks as if he’s about to erupt at any moment. Juliette Binoche is similarly brilliant as his wife Anne, whom he keeps at arm’s reach.

Hidden features no music whatsoever as we creep quietly through the lives of Georges, Anne and their son, and we stick so close to them that there are very few glimpses of the world around. The film has such a narrow focus that it’s almost jarring when we see images of the war in Iraq on Georges’ television. But such an inclusion is not coincidental. In Hidden every single moment, every single shot is of supreme importance, and even when nothing is moving in front of the lens, Haneke begs us to search for more.

The film delights in answering very few of the big questions, and features more than its share of ambiguities, which in retrospect is brilliantly at odds with its coldly clinical eye. I did leave the film frustrated, and certainly had a lot to talk about with others who had seen it. Overall the film’s sterile and confronting gaze/performance had me glued to my seat for the entire two hours, and I can think of no other film that stares back at audiences so unnervingly, coldly dismissing us all as voyeurs. A must see.

←The Squid and the Whale The New World→