I was never quite convinced by Hero, although I couldn’t figure out why. Was it the mode of story-telling – repeated scenes from different perspectives over and over again – that got to me? Or just the story itself? Whatever it was, I didn’t love this film, and I had sorely hoped to. I did find it to be as other people have said – one of the most amazingly beautiful films I’ve seen. Unfortunately, the plot is less exciting, being revealed as mostly one dimensional after the initial confusion. That’s fine, as the main selling point is the imagery, but a more substantial background may have helped. Struggling within this lack is Jet Li, who although valiant and impressive in fight scenes, is strangely lacking in direction in expository ones. It felt as though the lack of plot may have affected him – how many ways can you tell the same story with slight variations before it gets dull even to the players?

Tony Leung and Maggie Cheung were much better, but again that may be because the script called for them to explore their relationship, and the clash of their competing ideals with their love for each other, allowing them much more scope for dramatic performance. The difficult decisions faced by them were the best part of the script and direction.

Is it better than Crouching Tiger, Hidden Dragon (Wo hu cang long)? I enjoyed it more, but I didn’t love Tiger. The action is performed more fluently, although there are still problems with some of the wire work seeming too much like, well, wire work.

If you enjoy looking at amazing scenery, astonishing combinations of costume and landscape, and can allow yourself to escape for a little while, you may well love this film. If looking for complexity of character and plot, this isn’t for you. For me, I really enjoyed it, but wanted to love it…

Hey hey, what do you know? I concur with Mark on this one. For me Hero was definitely a case of style over substance. Technically, this is a supreme achievement. The special effects and stunts are nothing short of brilliant. There were times (such as the lake scene) where I honestly had no idea how they pulled it off. 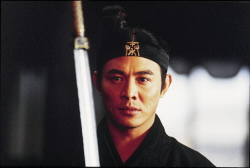 That being said, Hero is firmly entrenched in the wirework school of action – the zero gravity stunts looking a bit silly at times. I’m not a big fan of this kind of action (Crouching Tiger, Hidden Dragon got silly when they started to fly), and maybe I’m not the best judge of Hero because of this.

The story itself didn’t grab me. I have to confess that at times the Rashomon-style narrative confused me a little, but for the most part the problem was that I felt very little for the characters.

It’s great to see Jet Li in a quality film. There was nothing wrong with Cradle 2 The Grave and The One – just as long as you didn’t compare them with good films.

It’s the cinematography that overpowers the viewer in Hero. It is nothing short of stunning. The soundtrack is also fantastic. You HAVE to see this at the cinema.

All in all though, I didn’t really enjoy this film as much as I thought I would. One of the main problems was the trailer, which whilst giving away none of the plot, it did show me just about every stunt. I often knew what move was coming next because I remembered the trailer.

A feast for the senses, if not very emotive.