Although Heaven it ain’t, it is a great film.

Stuart loves Tykwer, he can’t get enough of him. How often have I heard from him, how he writes his music as well as the script and directing? Blah, blah, blah is all I heard, especially after he showed me The Princess and the Warrior (Der Krieger und die Kaiserin) which wasn’t really that good. I did love Run Lola Run (Lola rennt). So he was one for two. Make that two for three. Heaven is a beautiful film. Starting with an act of violence incongruous with the title and my anticipation, and finishing with a dreamy farewell, this film is just lovely. An exploration of personal motivation and good vs evil, it’s been a long time since The Zero Effect. Cleverly dealt with, with an actor (Blanchett) who could truly show the emotions and frustrations of the lead character, without ever being preachy, this is a great film.

The actors, particularly Blanchett, are excellent. Cate brings an innocence to her performance, which, given her actions, makes her all the more starkly multi-layered. The only performance of real depth required, she carries the film on her shoulders like Atlas, and not once does it slip. Ribisi is also good, although he is asked to be silent and strong, which many of us could do as well. His character is a little odd, and his love for his woman develops quite precipitously. The remaining cast are unknown to me, but I’d mention particularly the man who plays Ribisi’s father. With his limited time he conveys his conflict admirably, and he has wonderfully expressive eyes.

Whilst this isn’t a perfect film, it is very enjoyable, and hints at the future of Tom Tykwer. I will now await his next installment more eagerly than I did this one.

There’s very little to complain about in this film. It’s by one of my favourite directors, and thus this review isn’t really going to get very critical. Much of it will be me on my knees, bowing continuously and chanting ‘I’m not worthy! I’m not worthy!’

This film has quite an international heritage. You have Tom Tykwer, a German director, making a film that was initially undertaken by Krzysztof Kieslowski. It’s filmed in Italy, with Giovanni Ribisi and most of the cast speaking Italian. And then you have Aussie Cate Blanchett spending much of the film speaking English. Wow. There is something to be said for truly global cinema. 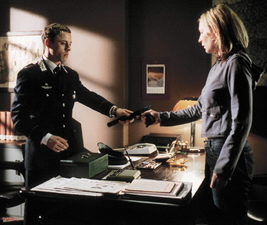 Krzysztof Kieslowski’s vision has been wonderfully adapted by Tom Tykwer. And it is such a quintessentially Tykwer film that it’s surprising he didn’t write it himself. As with all his films, it is beautiful to look at, and the soundtrack is awesome (his group Pale 3 contributing with a few tracks).

It isn’t at all surprising to learn that Cate Blanchett is awesome in this film. Her outstanding abilities match perfectly with the Tykwer direction we’ve come to expect. She also is incredibly beautiful in Heaven (even more so than usual).

Heaven is full of all the traditional Tykwer moments. There are long, drawn out shots and scenes where very little movement occurs on camera, yet each scene is charged with such powerful emotion. Then there are those ‘moments’ shared by the characters. If you’ve seen Run Lola Run or The Princess And The Warrior then you’ll know what I mean. These are emotionally charged instances devoid of dialogue that take you to euphoric highs or depressive lows.

Hmm… I told you this review wouldn’t be very objective. Spellbinding, uplifting and powerful entertainment.