The Harry Potter films have just been getting slicker and slicker. The first two Chris Columbus-directed efforts did their best to please readers and stuck pretty much to the source novels. Alfonso Cuarón’s vastly superior third film took a whole lot of liberties with the original story, but crafted a much better movie. Turning the fourth tome into a movie is no mean feat, but thankfully Mike Newell’s film focuses only on the integral plot developments, casting aside all the bits and pieces that fleshed out the book. We’re left with one fast-paced action-filled ride that doesn’t feel anything like the 157 minute running time. The Goblet of Fire is even darker than its predecessor, Harry Potter and the Prisoner of Azkaban, and in fact there is very little sunshine available at all to illuminate proceedings. The special effects, whilst still occasionally frustrating, are better than they’ve ever been in the Harry Potter movies. This is easily the funniest film in the series also, and Newell (director of Four Weddings and a Funeral) obviously knows how to get the best out of such well-known characters.

It’s been great fun watching the recurring performers over the years, and seeing the kids grow up has been an almost unparalleled cinema experience. Both Daniel Radcliffe (Harry) and Rupert Grint (Ron) seem to be doing their best to act younger than they actually are, and I’m sure the constant rumour that the cast will soon be replaced will continue for some time. I’ve always felt that Emma Watson (Hermione) has been under directed throughout the series, and this is the same in the fourth instalment. A strong performer, she sometimes seems to go a little too far, like she’s trying too hard and has already got her Oscar acceptance speech ready. Now that the kids are well into their teenage years, there’s room for a little more emotional drama – romance, jealousy and sexual innuendos abound, and it makes for a much more interesting cast of characters.

Brendan Gleeson is one of the new arrivals as the Igor-like ‘MadEye’ Moody, and – as with all the adult stars of the series – delivers a brilliantly restrained performance. The mature actors have always quite rightly taken a backseat to the child stars, and in fact Alan Rickman’s Snape stands quietly in the background for the first quarter of the film, almost like he’s waiting patiently in the wings. Of course the arrival of Ralph Fiennes (The Constant Gardener) is probably the most significant addition to the Potter film alumni, although he’s almost completely unrecognisable under all the makeup effects. It was interesting to note that John Williams isn’t at the helm of the orchestral score this time; instead we have Patrick Doyle writing and occasionally relying on Williams’ recognisable tunes. As a consequence, the music certainly is a lot less intrusive. Williams has always been heavy on the leitmotifs, and his work on the Star Wars prequels was edging towards annoying by the time The Revenge of the Sith came out. (Yes we see how the well-known themes from the original trilogy were slowly coalescing, but please why couldn’t we have had something original?!)

Deliciously dark, there isn’t a dull moment in The Goblet of Fire, and in fact the only flaw is in the last scene, which had the audience laughing rather uncomfortably. To be fair though, there’s no escaping it now – this is part of a series, and thus it’s hard for the filmmakers to round off the tale neatly. But anything would have been better than this frustrating little last minute hiccup.

So why am I only giving it a traditional rating of 3.5? Well it has to be said that the Harry Potter films don’t offer much more than gleeful escapism. The Triwizard Cup was a fairly flimsy narrative structure, but for all its flaws, (i.e. surely these deadly trials constitute child abuse!? And what sane parent would sign their child’s permission form?), the story was a lot of fun.

I didn’t enjoy the fifth book, ‘The Order of the Phoenix’ as much, but here’s hoping that the Harry Potter movies keep getting better and better.

After Alfonso Cuarón’s welcome departure in Harry Potter and the Prisoner of Azkaban from the by-the-numbers approach favoured by Chris Columbus for the first two adaptations in the series by J.K. Rowling, Mike Newell returns us to familiar and uninspired territory with this fourth outing, Harry Potter and the Goblet of Fire.

Featuring generally disappointing computer-generated effects, a running time bloated by stale action sequences and an inadequate translation of the plot from the source novel, and over-the-top performances by Emma Watson and Michael Gambon, Goblet of Fire adds only to the ammunition for those who argue that adapting a great novel for the screen must by necessity diminish the book itself, and thus end in failure.

Much like Harry Potter and the Philosopher’s Stone and Harry Potter and the Chamber of Secrets before it, the magic of the text is lost, and no significant attempt is made to make a film as opposed to only a strict portrayal of the novel. The strength of Cuarón’s work in the third in this sequence is further illuminated in light of this subsequent film.

After praising Emma Watson’s performance in Azkaban, she is guilty of significantly over-acting in her pivotal role as intermediary between Harry and Ron. In contrast to the restraint shown by Daniel Radcliffe, Watson too often favours ‘dramatic’ sighs and ‘meaningful’ looks to bring any enjoyment to this Hermione. Her inner conflicts seem only childish, and this brings down the whole film – a film which should have revelled in the new-found angst its characters experience.

The set pieces – including the opening of the Quidditch World Cup, the entrance of the Durmstrang and Beauxbatons schools, the three tasks of the Triwizard Cup, and the final showdown with He Who Must Not Be Named – are all conceived without originality and play out without tension, excitement, joy or anguish. The Hungarian Horntail is the one CG effect in this film that can truly be called a highlight, yet the chase scene between it and Harry is lacking in imagination, and draws only inevitable comparisons to every other flying broomstick sequence in the previous films. Where is the sense of excitement one felt when seeing Harry fly for the first time for the Gryffindor Quidditch team?

The second-annual addition of new cast members to the Harry Potter franchise has, in this case, been a partial success, with Brendan Gleeson the stand-out as ‘MadEye Moody’. He is dark and rude, and at times surprisingly amusing, and his make-up and costuming is excellent. Katie Leung is passable as Cho Chang, and Miranda Richardson grates as Rita Skeeter, although she is supposed to. The likes of Maggie Smith and Alan Rickman are sorely wasted in bit parts that hardly require their renowned skills. 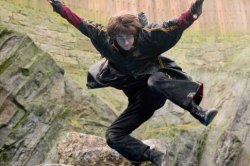 Inevitably, the darkness of the events that occur has drawn much comment, and it’s true that the appropriateness of this film for a younger audience could be questioned – in this case, the slavish aping of the book means only that one shouldn’t be surprised by its newfound horror. There are moments of chilling cruelty, both to humans and to animals, and at no stage is this behaviour apologised for or easily dismissed; it is only this bleakness, however, that can save this film series. We’ve seen cute; we’ve been amazed by Hogwarts’ moving staircases and talking portraits; we’ve been touched by the power of friendship. Moving on now to more adult fare, one can hope that the future will bring a serious exploration of dark and light, in the way that Batman Begins, for example, succeeds.

The selection of material to include and the weighting put on each interaction between characters seems out of keeping with the tenor of the novel, and sadly this is the most significant of the many flaws that blight this film. While it runs for 157 minutes, the essence of what the heroes go through in the source text is lost, and in its place is only over-done CGI sequences and none of the true character information J.K. Rowling provided. The tension between the trinity of main characters seems manufactured and trite, and one wonders how another director may have handled this adaptation.

Harry Potter and the Goblet of Fire tries hard to do justice to its weighty source, but in the end fails on almost every level. It is only my love for these characters that allowed me any enjoyment of this at all.

←The Cave The Castle of Cagliostro→

Harry Potter and the Goblet of Fire