This was one of the many films I saw at the 24 Hour Sci-Fi / Horror Marathon at the Westgarth Theatre in Melbourne, that I had heard was terrible, but ended up quite enjoying. (The others included Paycheck, Timeline, and Secret Window).

I think Hollywood should realise that the ‘dead people trying to tell you something’ supernatural thriller trend should be laid to rest for another few years. The main problem with Gothika and many other films of the last five years is that we are witnessing the same mechanics over and over again (the highs include The Sixth Sense, the lows Dragonfly). 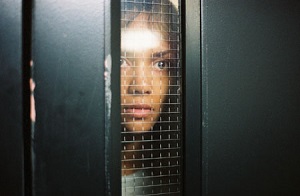 What on earth is Halle Berry doing here? Surely she has the power to choose any film she likes now that she has one of those unsellable golden statue things? She’s good but there’s no room in a film like this for truly fantastic lead performances (these are left for the supporting actors such as Penelope Cruz).

Don’t get me started on Robert Downey, Jr… I hate that guy. Ever since Natural Born Killers.

It’s depressing to note that Gothika is directed by Mathieu Kassovitz, who seems to be passing the time making average thrillers now that the masterpiece La Haine is behind him.

Most of the scares in this film come from people jumping up in front of camera, and whilst effective, this is not an especially difficult technique. Truly inspired and cleverly crafted horrifying moments stay with you long after you’ve left the cinema (the Japanese Ring (Ringu) springs to mind… I couldn’t sleep properly for a week). The asylum in this film also needs a good electrician to drop by – barely a moment passes without some sort of strobing going on… no wonder they’re all crazy.

Why’s it called Gothika? Who knows… I enjoyed this film, and it serves to pass the time, but there’s nothing that will remain with you once the closing credits roll.