I was under the impression that this film would be more of a comedy. It does have its moments, but really this is a heartfelt tale of a broken family, and on a greater scale, their broken country. The comedy is always there, lurking beneath the surface, but only occasionally rears its head. I suppose I have been watching too many American comedies, where the golden rule seems to be at least a laugh a minute. European films such as Good bye, Lenin! can take their time building up to more subtle character and narrative related comedy. 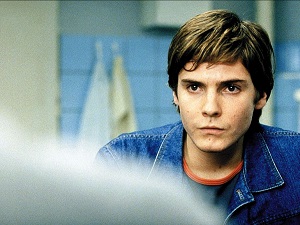 This film was a part of the X Filme Creative Pool, and is the first of these I have seen that wasn’t the product of Tom Tykwer. It’s good to see that some great films have been made within the ‘collective’ (for want of a better term), and even more so with a film that has such profound significance to its country of origin. Good Bye, Lenin! is very much a German (well, East German) film, and as such I’m sure that it would have had more impact if I had a little experience of the country under my belt. (ie: other than simply learning the language for six years in high school… ich heiße, du heißt, er sie es heiß… etc… Ich liebe dich mein schatz… you know what I mean… Du bist ein Käsekopf).

Not to say this film didn’t affect me. The plight of the main characters was quite touching, even if I found some of their actions to be a bit over the top. Chulpan Khamatova particularly gave a fantastic performance, and was giving her all every moment she was on camera, even if only in the background (although this comment may have something to do with her being incredibly gorgeous).

The statements made in this film (both literal and subliminal) made me incredibly aware of the turmoil that Germany has faced in the past, and how it has survived so much change, and just how little change I’ve had to deal with in my own country.

Great film, even if it’s not so funny.