Hollywood has a bad track record of adapting Godzilla. Despite what some Mark Lavercombes would have you think, 1998’s Godzilla was pretty darn awful. So it’s understandable if many would be reticent to see another US take on Japan’s King of the Monsters. “Even Matthew Broderick couldn’t save Emmerich’s Godzilla!” I hear you shout, in complete contravention of the Inside Voice Rule. Fair call – you have a point. But this new Godzilla is directed by Gareth Edwards, the writer/director of the brilliant Monsters. That in itself is enough to warrant a look at this new incarnation of everyone’s favourite nuclear-powered beastie. 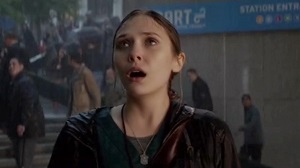 Joe Brody (Bryan Cranston) is an American scientist working in a Japanese nuclear facility when something goes dreadfully wrong at the plant. Whilst the area is quarantined for over a decade, Joe never truly believes the story provided by the government and/or the company; he thinks it’s a cover-up. Just how on Earth you’d cover up something as big as Godzilla is a good question (perhaps “the usual story. Gang-related…PCP?”), but Edwards’ film does a pretty good job of making us believe such a ridiculous conspiracy. By cleverly tying the film in with real world events, like the nuclear testing at Bikini Atoll in the 50s, the film feels a teensy bit more believable than any of the other Godzilla films, aside from maybe the original Gojira.

The story cleverly introduces characters one a time. As we follow the trail of destruction from one country to another, we meet new characters just in time for the former ones to drop off. It’s a technique that works well, and something you don’t often see in disaster movies. The classic template – of following half a dozen characters through intertwined narratives – got tiresome a long time ago, so this is a welcome change.

The problem with Godzilla, however, is that the human characters really aren’t that compelling. You may wonder why this disappoints me – what did I expect from a movie about a giant, f*ck-off dinosaur eating skyscrapers? – but I had hoped that Edwards’ presence would mean he’d be able to focus on the small details, the quieter character moments. 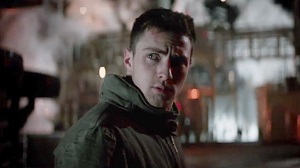 A buffed-up version of Aaron Taylor-Johnson plays Joe’s son, Ford, with all the nuance of half-brick. It’s strange, since his performance in Kick-Ass was so perfect, but here he’s rather useless, dramatically speaking.

There are lots of quiet moments in Godzilla, but the most successful scenes are the big budget set pieces. We get to see the monster quite early on, but he’s only ever on screen for moments at a time. In fact, this film is basically two hours of giant monster reveals. It’s as if they had a list of 30 or so awesome ways in which to introduce Godzilla, and decided to go with all of them.

The brilliance of the high octane moments is that you never – I repeat, never – lose track of what’s going on amidst all the chaos. Pacific Rim could learn a lot from Edwards’ skills as a visual effects artist. Whereas Guillermo del Toro’s film was almost impossible to follow, what with the titans fighting at night time, in the rain and waist deep in the ocean, Godzilla captures every such moment perfectly.

Godzilla is an entertaining, big budget popcorn action movie in the way that Michael Bay’s Transformers sequels tried to be and failed. At its best moments, the carefully orchestrated scenes of destruction echo Jurassic Park/Close Encounters of the Third Kind-era Spielberg, and Edwards’ skill behind the camera cannot be denied. It’s just such a pity that he couldn’t make the human characters any more compelling.

←The Amazing Spider-Man 2: The Rise of Electro Steins;Gate Series Collection→