The film of the book of the painting, got it?

Amidst the glut of remakes of bad tv shows, comes this film version of Tracy Chevalier’s fictionalised life of the model for Vermeer’s famous ‘Girl with a Pearl Earring’ painting, painted in 1665. Although, having not read the book, nor been a art critic, I can review this film without the introduced bias of former knowledge.

The life of a peasant girl in 1660’s Holland seems tough. Not only would one have to put up with being a slave to richer people, one would also have to be on guard for the advances of the many eligible men one comes across! This young woman is confronted with the attentions of three (!) men almost as soon as she joins the household of the painter, Vermeer, as a maid. The interweaving passions, loyalties, relationships and jealousies form the basis of this film, and the cause for the final outcome. Johansson is excellent, again, and brings just the right shyness, strength and courage to her performance. She is a remarkable actress, and this film is worth watching if only for her. Firth is also great, although he continues to play the same guy again and again, leaving me to wonder if he’s just being himself. Were it not for his cameo in the Blackadder Millennium special, I would think Colin was dour as they come. Wilkinson is fine in a limited role, however the woman playing Mrs Vermeer is not only appallingly overacting, she’s just plain ugly. Now perhaps this was the intention of the director, but she really comes across as repulsive, with her whining, jealousy and insecurity. I was greatly annoyed by her, so perhaps the goal was achieved, but I wonder if the film would be stronger if the heroine wasn’t so clearly defined by the frightfulness of the other?

The costumes seem authentic, and the settings and set design were believably grungy. Without much of what we take for granted, it seems amazing that anything of beauty could be created here. The market scenes were really good, although I wasn’t convinced by the pretty boy butcher’s assistant – his hair was just too well groomed to be acceptable.

The inevitable outcome leaves the plot lacking somewhat, however this is made up for by the delicate touch displayed in dealing with the relationship between Vermeer and his muse. Firth and Johansson play off each other very well indeed, and save this from being very dull and forgettable. I just wish the wife wasn’t so damned annoying!

I hired this film in the hopes that Johannsen’s performance would overpower Firth’s typically lethargic performance devoid of any charisma whatsoever. It didn’t. 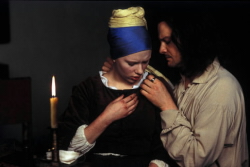 I think the only time I’ve liked Firth is in What A Girl Wants. I really don’t understand why his bland visage and ‘old man’ sensibilities rake in the box office dollars.

Girl With A Pearl Earring is a beautiful film, and you would hope so, considering the source novel has its inspiration in a painting. The cinematography, set design and costuming don’t disappoint (except for maybe Firth’s Fabio-like mane, which looks silly at the best of times). The film also has a great score, although unfortunately there was nothing much else that drew me in.

Johannsen barely spoke, which could explain why I didn’t enjoy it much. Her performance is certainly very good, but the film simply wasn’t interesting enough.

On a slightly off topic note, I think Firth should get together with Jennifer Garner, and together they could gum us to death with their bland, uninteresting demeanours.

Girl with a Pearl Earring