Ah, werewolf movies. There are so few of them. And there are even less good ones.

I should point out that I think Dog Soldiers is the best (and in fact the only halfway decent) werewolf film out there. All the rest (including American Werewolf In London) leave me less than impressed. It’s something to do with the ‘seen it all before-ness’, and the fact that most of the time the creatures look stupid. It seems that there is more scope in vampire films.

So we come to Ginger Snaps – a low budget werewolf film with a great title. 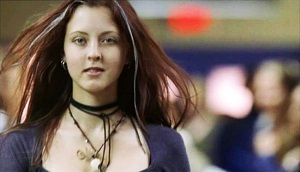 I loved the main two characters in this film. I thought their personal connection and relationship to the rest of the school gave the film an edge. I also thought that the links between ‘that time of the month’ and werewolf mythology worked quite well (although in the Dog Soldiers commentary the writers swear they wrote that line well before Ginger Snaps was made). The performances were all fine, and it was cool to see Kris Lemche from My Little Eye in another low budget horror film.

The storyline, whilst being interesting to start with, soon tapered off into familiar territory, and the climax itself was quite boring.

Unfortunately the full werewolf form is quite disappointing. I realise they didn’t have buckets of money to throw around, but the ones in Dog Soldiers were quite effective.

There isn’t much else to say about this film… Oh, except that the opening credit sequence is fantastic. I wouldn’t be surprised if the director and/or cinematographer had tackled a similar theme before in a short film.

Ginger Snaps starts out rather well but falls flat around half way through.