Perhaps one of the most mainstream films to be screened at MIFF this year, The Ghost Writer is an above-average thriller that is let down only by several strange writing decisions and the use of a clichéd plot device that borders on the ridiculous.

When the body of the ghost writer responsible for the memoirs of former British Prime Minister Adam Lang (Pierce Brosnan) washes up on the beach near Martha’s Vineyard, the most obvious conclusion is that a new ghost writer must be found. Lang’s book is likely to sell like hotcakes, you see, what with him being wanted for trial by a war crimes tribunal. Ewan McGregor’s character ‘The Ghost’ isn’t expecting to become involved in the intricacies of his new subject’s family life, however, nor the centre of a spy scandal.

There are elements of The Ghost Writer that work very well indeed, and then there are the areas in which director Roman Polanski appears to have dropped the ball. If catching an international spy were as simple as performing a Google search, for example, one imagines most of them would have been rounded up by now. Perhaps he doesn’t use the internet? There is really no excuse for treating audiences like we’re back in the days of The Net, and even the least tech-savvy audience will see this decisive moment in the plot as nothing more than lazy.

Additionally, when his lead character spends much of the film sporting a curiosity bordering on paranoia, the final scenes are simply impossible for the audience to accept. Given the importance of the information he has obtained and the likely outcome if anyone finds out that he knows, why would The Ghost behave in the way he has been scripted to? For a film to get to its final moments and take such an extraordinary misstep is really unfortunate.

The performances are fair, with Olivia Williams the standout as the spurned former Mrs Prime Minister. She manages strong, fragile, sexy and vicious, but also benefits from having the only other major female character played by Kim Cattrall. That Cattrall’s accent is so bad and no-one seems to have realised during production is astonishing, and one wonders why Polanski didn’t just throw in the towel and hire a British actress to play this British character. Brosnan is adequate and McGregor passable in the lead, although there is a strange lack of engagement with The Ghost and his plight.

It’s not terrible, and many sequences really work, encouraging one to consider how good the film might have been. As it is, however, The Ghost Writer could have done with some rewrites of its own.

Just the other day I was watching Vertigo, in particular the stakeout scenes where James Stewart follows Kim Novak all day, and I was struck by how wonderful a basic, slow-burning mystery can be. That sequence in Vertigo goes for something like 15-20 minutes with almost no dialogue whatsoever, and we’re spellbound. It made me wish that there were more films made to this template these days. 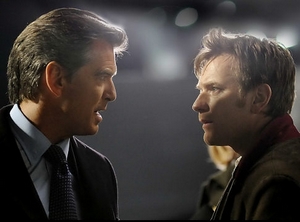 The Ghost Writer is very old school. Of course, Polanski’s style has never been far removed from Hitchcock, but this film in particular seems reminiscent of work by the master.

Ewan McGregor is on top form here, and it was very easy to slip into the shoes of the ‘Ghost’ as he becomes accustomed to his new gig and embroiled in a fascinating mystery. McGregor really does have a knack for playing the Everyman, and I think that with a film such as this – where he’s in every scene, and everything is viewed from his perspective – a lot of the success rests on his shoulders. Olivia Williams and Pierce Brosnan are both wonderfully effective in their roles also, and I must say I never thought I’d see James Belushi in a Polanski film.

In the long run, however, The Ghost Writer is a little disappointing. The mystery is so well crafted, the pieces of information scattered along the way so tantalising, that the end result is a bit of a letdown. That’s not to say that the film isn’t worthwhile, however. I would say that this is a wonderful example of old-fashioned storytelling, but that phrase probably has enough negative connotations to put people off.

The fact is that too many films rely on complexity – both in terms of narrative and their construction – so it’s really great to see a film which goes back to basics. As I’ve already alluded to, Hitchcock did this all the time – think of the key swapping fiascos of both Dial M for Murder and Notorious – and such long, drawn out sequences with an incredibly simple premise and the most basic of image composition really do get to the crux of the magic of cinema.

The Ghost Writer is fantastically entertaining stuff. It doesn’t leave one with a sense of unease, or a wish to watch it a second time like Polanski’s best does, but it’s a great example of masterful direction.