The Garth Method is a full-length feature that manages to surpass its low budget origins. Writer/director/star Gregory Pakis has gone to extraordinary lengths to create an honest, unpretentious comedy that features a miasma of supporting characters, each more memorable than the last. 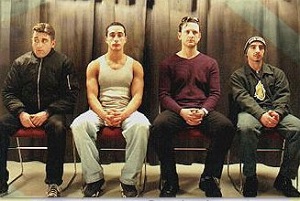 It’s the astonishing collection of talent collected by Pakis that impresses the most with The Garth Method. Whilst he plays the titular character and narrates proceedings, in 82 minutes we see a huge cast of characters whiz by. From the Napoleon Dynamite look-alike Scott Terrill to the hilarious Katrina Baylis, who appears in some of the best scenes, all get a chance to shine. The difficulty in performing dual roles (star and director) is apparent, unfortunately, and it may have been better if Pakis had enlisted the aid of a co-director, especially for his solo scenes.

The narrative structure may be rather simple, but the layers of unreality can be quite confusing at first. A mixture of mockumentary, re-enactments and in camera narration, the story really comes together in the last act. Some of the face to camera interruptions throughout the film are quite intrusive, especially when they don’t actually further the plot. But the side-splitting final scenes won’t soon be forgotten, as we finally witness the crimes that put Garth behind bars. I for one would have been quite happy for this last section to be longer.

The camera work is solid, never becoming pretentious or arty, and the mix of black and white and colour works well. The sound is patchy at times, but Craig Bryant’s score is flawlessly suited to Garth’s exploits. The montages work perfectly, and it’s apparent Pakis and Bryant worked closely as the two elements fuse together brilliantly.

By the final scenes I really felt I had taken a journey with Garth, and the film certainly ends on a high note. Congratulations are due to Pakis for his extraordinary creation and the amount of work he put into The Garth Method.

←When a Stranger Calls March of the Penguins→