Garden State is a fantastic film, and the sign of great things to come from Writer/Director/Star Zach Braff.

Yes, that’s right, the star of ‘Scrubs’ on television has hidden depths. Braff has crafted a coming of age tale of beauty and depth, that belies his own tender age. His insight into growth and acceptance, and his comic touch, allow him to reveal the soul of Andrew Largeman slowly, confident we will stick with him. And we do. I loved almost every minute. Andrew’s return to home-town New Jersey following the death of his mother brings with it all sorts of complications – a difficult reunion with his father whom he has never got along with; another with his stoner mates from high school; and the chance meeting of a young woman who may just change his life, if he will let her. END SPOILERS The story itself isn’t complicated or new – there have been many films made about personal growth at the time of bereavement – but Braff shows us something different… the dark side of becoming numb to the world, and the danger of being wrapped in a cocoon.

By getting to know Portman’s Sam, Largeman risks opening up again, feeling the sorrow of his mother’s death, the pain of his estrangement from his father, and the problem with living without direction. Braff displays subtlety and grace, and an almost perfect sense of comic timing, relieving tension with a flourish.

Portman is excellent, showing a tenderness and courage that perfectly matches the needs of Andrew. She is beautiful and engaging, and this story only truly gets going once she enters. Peter Sarsgaard also excels as Andrew’s old friend Mark. The real star is Braff however, and he seems to revel in the strange circumstances he finds himself experiencing, and the opportunity to show a gradual character development not possible on television. Even were he not also the writer and director, I would hope this film lead to him getting lots of starring roles.

The soundtrack is another highlight, with a selection of mood music and tunes that really compliments the film. Sometimes soundtracks can just add that extra touch, and certainly this one does so.

Garden State is not perfect, but the combination of comedy and emotion works well for Braff, and I really loved watching this film. The development of Andrew Largeman is wonderful to see, and the role of his family and friends in helping him achieve change is encouraging to all of us who have ever felt static. This is a very enjoyable film, with an intelligence and wit often missing from Hollywood productions, and I highly recommend it.

Garden State is a wonderfully heartfelt film, showing that the star of ‘Scrubs’ truly is a great big softie. 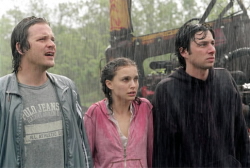 The entire cast does a great job. Braff manages to have a deadpan delivery yet still convey emotion. Ian Holm is good but doesn’t really have that much to do. And Natalie Portman is fantastic, proving that there will be life for her after Star Wars. Yes, folks, she can still act! (You get a bit worried that maybe those the Lucas franchise blunts the stars’ acting tools, what with all the wooden dialogue and CGI realities.) Andrew and Sam are a great match, and work wonderfully on the screen together.

There are a number of similarities between Eternal Sunshine Of The Spotless Mind and Garden State, the most obvious of which is Portman’s entrance. It is almost exactly the same as Kate Winslet bugging Jim Carrey in the former film. That being said, it is still a great scene, and thankfully the film goes along a fairly different tangent. This film certainly isn’t quite as mature or insightful as Eternal Sunshine, but I enjoyed it just as much.

It has its clunky moments, and one particularly superfluous scene, but I loved this film all the same. I think above all else this film is a great debut from Braff, promising some great stuff in the future.

←The Hitchhiker's Guide to the Galaxy The Forgotten→