A live action update of the 2004 anime based on the manga by Hiroya Oku, Gantz boasts an opening half hour that is truly insane. (In fact, if you want to be surprised, then skip the rest of this paragraph.) The story concerns two teenagers who die after trying to save a man from being hit by a train in the subway. Instead of dying, however, they wake up in a white room with a huge black orb sitting at one end. The orb has instructions for them: since their lives are now forfeit, they are to go out and kill aliens using the futuristic weapons and armour provided. Before long they’re in way over their heads and there’s all sorts of madcap super-powered antics going down. 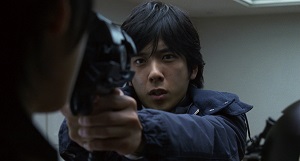 Gantz is kind of a cross between The Matrix and Sucker Punch. Ordinary people granted super-powers? Check. Action scenes that resemble boss fight stages from computer games? Check. In fact, I wouldn’t be surprised if Hollywood hadn’t already toyed with the notion of remaking this. After an initial encounter with an alien that’s very, very bloody, the rest of the film is rather cartoonish, as teenagers Kei Kurono (Kazunari Ninomiya) and Masaru Kato (Ken’ichi Matsuyama) become accustomed to their newfound abilities.

Each of the fight scenes featured in Gantz are true future classics. They are quite long – over 20 minutes each, it seemed – and this is where the film is most confident. The lulls between the action do tend to drag in comparison. The human drama is well handled, yes, however the pacing needed work. The film comes in at 130 minutes, and whilst it’s not boring per se, it definitely could have shed 15 minutes or so.

There are several frustrating moments in the film featuring idiotic protagonists not firing their guns when they have clear shots. All too often, shock and awe seem to render our accidental heroes motionless in the face of certain death, and time and again I was driven to exasperation as they failed to take action when they should have. This may simply be a case of lax editing or unclear explanation of how their weapons work, but those few forehead-smacking moments really do stand out.

The special effects are wonderful and there are just as many practical effects as CGI on show, which is great. Actually, all of the production values are top-notch, even if the usual problems appear in the climactic scenes where the visual effects team clearly didn’t have enough money to throw around. The quality of the Blu-ray image is exceptional. The film looks much, much better than any of its trailers on YouTube.

Of course, this is only part one of a two part story. Gantz 2: Perfect Answer is due out on Blu-ray in February, and I’m super keen to see where it’s all heading. There are a tonne of unanswered questions in Gantz, and it’ll be interesting to see them answered. As gonzo sci-fi action movies go, this one’s quite nuts.

Gantz is available now on Blu-ray and DVD from Madman.