It continues to amaze me that traditional slasher films still have a place in the cinematic cannon after Scream. I wouldn’t have been surprised if Wes Craven’s fantastic post-modern horror saga (the first two films, let’s pretend Scream 3 doesn’t exist) had signalled the end of the slasher genre. 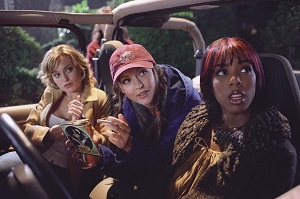 But then films like Freddy Vs Jason come along, which features all the things that Scream made fun of – big breasted bimbos running around screaming, teen sex and drug taking being punished by way of gruesome death. There are a couple of moments when it doesn’t seem to be taking itself too seriously (take note of Englund’s ‘eye-acting’, a method perfected by James Caan in North Star), but on the whole Freddy Vs Jason is firmly entrenched in the genre and there is nothing here we haven’t seen before.

That being said, it is kinda cool. Much of the film seemed like a videoclip, full of awesome images that look great on their own but don’t really make sense in broader narrative. As with most supernatural slasher fests the film spends a lot of time explaining the certain ‘physics’ or rules that apply to each of the two nasties, and then spends most of the climax breaking those rules. One of the coolest parts of the film is to hear how the composer wove together the well-known and distinct musical themes of each film series.

Robert Englund’s always gonna have it over ‘the other guy’ (that nobody knows), since Freddy Krueger actually has a personality. In this film Freddy becomes the Godzilla (ie. he was previously the bad guy, but is now the ‘hero’ of the piece) so we cheer for him even though he kills lots of people.

Was I scared? Um, no. But I did dread the gruesome moments that I knew were coming. It was nowhere near as terrible as many reviews I read seemed to suggest.