Here’s a film that really packs a punch.

Part of the brilliance of Chris Kraus’ Four Minutes is that neither of the main protagonists gives an inch, no matter how dire the circumstances. Jenny von Loeben (Hannah Herzsprung) is serving jail time in a women’s correctional facility. Even within the penitentiary she’s an outcast, and liable to break out violently at any moment. The elderly Traude Krüge (Monica Bleibtreu) teaches piano in the prison and sees brilliance in the young woman and offers to train her for an under 21 competition. What follows is a complex psychological dance as the two of them continually cross lines in an effort to assert their dominance over each other. 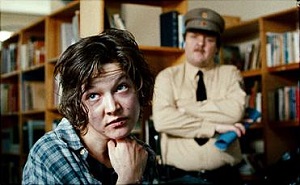 Herzsprung and Bleibtreu are stunning. The entire film hinges on their pitch perfect characterisations. There are supporting characters (well played by Sven Pippig, Stefan Kurt and Vadim Glowna), though they’re important only through their connection to Jenny and Frau Krüge.

I haven’t seen a cinematic pairing as furious or powerful as this since Hard Candy, and here the dynamic is even more erratic because the two of them are equally matched. Even at the age of 20, Jenny has a dark past that lead her to where she is now, but Frau Krüge has her own demons too. Throughout the film we flash back to her experiences as a nurse in World War II, and we slowly learn that she is just as flawed as Jenny. Whilst Frau Krüge may have the authority and experience, Jenny has the talent and the anger that will keep the two of them at each other’s throats. Then of course there is the rest of the world – the prison wardens, Jenny’s father, the media and society in general that all hold some sort of power over the two women.

Writer/director Chris Kraus keeps things tight, and at no point does the film drag. Considering that the central character is being trained classical piano, there’s a lot of other music. The opening titles feature some heavy metal of sorts, and Jenny is always more interested in what Frau Krüge disparagingly refers to as ‘negro music’. The feature flirts with performance film clichés, but never goes too far. Just when you think the film has the potential to get schmalzy or conventional, the narrative throws something new at you, sending proceedings into a tailspin.

There’s a kind of lunatic fury driving Four Minutes, and every second smoulders. A strong contender for the best film of 2007.