Darren Aronofsky proves he’s one of the most incredible filmmakers in the business today with The Fountain, a stunning and unparalleled vision. 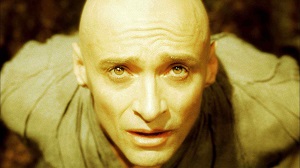 Whilst Pi was fairly devoid of emotion and the brilliant Requiem for a Dream was horribly unpleasant, with The Fountain Aronofsky seems to have struck the perfect balance. This is cinematic poetry, full of circular insanities and a tendency to screw with your head, but it has a true emotional core and exceedingly simple story at its heart. Much of the film could be interpreted in a dozen ways, but overall it’s a meditation on love, loss and life.

Hugh Jackman is brilliant (even when talking to a tree – testament to true thespian aptitude) and I’d rank this up there as one of his best performances. Rachael Weisz is similarly great, and whilst her Izzi Creo has echoes of earlier roles (namely Tessa Quayle of The Constant Gardener) she brings a wonderfully disturbing edge to her character.

The film comprises three interlocked stories (or a single story, depending on your perspective) and the production values are astounding, from the towering Mayan pyramid to a floating glass world at the end of time. For a ‘mere’ 35 million Aronofsky takes us to places the likes of which we’ve never seen, and I would bet that this pared-down version of the script is in fact better than the 75 million dollar film initially linked to Brad Pitt.

Clint Mansell and the Kronos Quartet have again provided the score, and if anything it’s better than the fantastic Requiem for a Dream soundtrack. Again, this may be because the subject matter of The Fountain was so much more palatable, but it seems to flow a lot smoother than the previous film.

The Fountain boasts absolute simplicity but provokes infinite interpretations, and this is its crowning achievement. It’s pure and simple though several viewers might be affected identically but have different views on what actually occurred. This may frustrate a lot of viewers who crave something a little more concrete, but I found The Fountain to be near seamless. There are a couple of moments where the imagery gets a bit too silly – I’m sure these might provoke sniggers from some (though our cinema was silent) but this is otherwise a near-perfect experience.