The Forgotten was a film I was always going to see, no matter how many scathing reviews I read. And for the most part this thriller was about as good as I expected. 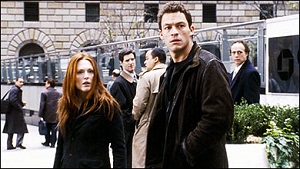 At the centre we have Julianne Moore, who hasn’t really convinced me since Assassins. There’s nothing exactly wrong with her performance here, but she simply seems to be lacking in drive and/or charisma, much like the supporting cast. Her husband Anthony Edwards is strangely inept, completely unbelievable as her partner.

The premise to The Forgotten is great, and I’m sure it looked fantastic on paper. Unfortunately there’s simply not enough to flesh this out. No subplot, no intriguing characters. The Forgotten plays out like an extended short story, or maybe a converted X-Files episode.

There are several great film moments here, but not enough to truly impress. In fact this film hinges very much on one particular special effect, which – whilst impressive the first time you see it – gets a bit tired by the end of the film.

Since leaving the cinema I have appreciated this film more and more. The initial viewing, however, was an entertaining diversion, nothing challenging or complex. The Forgotten does have a couple of fantastic shock moments, one in particular that I’m sure had the studio execs quivering with excitement when they saw the rough cut.

If, like me, you enjoy the average supernatural thriller, this one’s for you. If you want something more, go and watch an M. Night Shyamalan film.