The inclusion of Judd Apatow’s or Seth Rogen’s name on a poster seems to ensure that a film earns mega bucks, and I imagine Forgetting Sarah Marshall isn’t going to alter that trend.

Apatow produces this romantic comedy which is actually quite a decent flick, if not for some glaring flaws. First and foremost on this list is our lead character, Peter (Jason Segel). His TV star girlfriend Sarah Marshall has just dumped him, and he isn’t taking it too well. Like the main male characters from The 40 Year Old Virgin, Knocked Up and Superbad, Peter’s supposed to be a bit of a loveable loser. I guess the idea is that guys watching the film don’t feel threatened, thus attracting a significant new portion of the movie going public that traditionally eschew romcoms.

Unfortunately Segel isn’t up to the task. Sure, Peter is believable, and believably crushed when he is unceremoniously dumped, but he’s also a little dull. Actually, he’s very dull, and this is the main problem with the film. We’re supposed to be rooting for Peter, but I just spent most of my time waiting for him to shine. By the time we see anything other than self pity, it’s too late.

More’s the pity, because the script is actually quite good. Forgetting Sarah Marshall is actually a pretty hard thing for Peter to do, since he finds himself in close proximity to not just her, but also her new squeeze Aldous Snow. Kristen Bell plays the titular character brilliantly, and the scenes from her crappy TV show featuring William Baldwin are hilariously bad. Comedian Russell Brand plays pop star Aldous, and his character is basically an extension of his stand-up persona. What’s particularly impressive about the script is the fact that, well, everyone’s so nice. Aldous is quite a friendly guy for all his superstar flaws, and we frequently get to see the genuinely touching side of Sarah. This makes for a much more dynamic film than if they’d simply been arseholes the whole time. To top it off, there’s a whole host of minor characters who are all too willing to do what they can to help Peter – it seems the whole world is on his side. Paul Rudd and Jonah Hill unfortunately get lumped with pretty pathetic roles, their characters summed up by little more than a punch line.

Mila Kunis (who also voices Meg on ‘Family Guy’) is bright, chirpy and sensible – just what you’d expect in a love interest. Her scenes with Peter bring out the best in Segel, but it’s still not enough. That Segel wrote this often clever film, yet is the least accomplished performer is a shame.

It’s sad that there are almost as many negative elements as positive ones in Forgetting Sarah Marshall, cos it could have been great. It’s certainly much better than the overrated Knocked Up or Superbad.

Well, sure. If you found The 40 Year Old Virgin a highlight in 2005, perhaps you may find something to appeal in this rather dull and uninspiring attempt at mainstream romcom from the makers of such dross as Knocked Up and Superbad. Possibly you will have gone through puberty in the interim, however, and will see Forgetting Sarah Marshall for the puerile mess it really is. 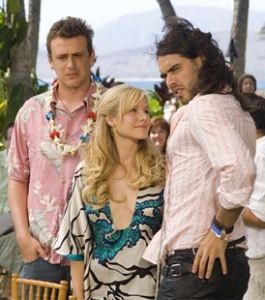 When she dumps him and his attempts to move on with one-night stands don’t provide the lasting relief for which he yearns, Peter travels to Hawaii only to find his ex and her new beau staying at the same resort. Hijinks ensue.

For anyone not yet used to the mysteries of male anatomy, a quick primer may help – men have penises! Now that the first ten minutes of the film are dealt with, we can all move on.

It’s been some time since such a confusing mess of ideas came with such powerful backing, and it is hard to imagine at whose feet the blame must lie. Writer and star Segel seems to have been trying to pen a tale of a man-child growing into the man he should be, but this is so lost under the weight of infantile sight gags (including the aforementioned ‘hilarious’ sequence showing an actual male penis! Gasp!) that the result is much less than he’d hoped for. Perhaps the film was rewritten to target the ‘Apatow market’, or maybe it started out this bad. Whatever the machinations it took to get it to our screens, however, Forgetting Sarah Marshall can be judged only on what has finally been presented to its audience.

Segel is drab as Peter, and with the audience spending so much time in his company they could be right to demand something more from their leading man. Bell and Mila Kunis are both adequate, with each lucky enough to have one or two scenes that allow them to stretch their legs as actors. Russell Brand steals every scene he appears in as Aldous Snow, an acknowledgement that simply can’t be credited to bit pieces by Apatow favourites Jonah Hill, Paul Rudd and Bill Hader.

The film moves at snail’s pace, taking far too long to get the players in place, and then too long again for anything substantial to occur to them. That there is finally a degree of character growth demonstrated is less of a relief than the fact the film is finishing up after a seemingly interminable 112 minutes.

The failure to generate any audience interest in the characters and their outcomes, alongside a script that doesn’t seem to know what it wants to be and a collection of scenes of ‘visual comedy’ that aren’t in the least bit funny consign Forgetting Sarah Marshall to the not-even-on-dvd pile. Now if only I could forget the whole film – that’d be something to celebrate.