Focus – not to be confused with Auto Focus, a film which has recently made its way onto my video store shelf. Focus – William H. Macy in fine form. Focus – Laura Dern doing a fantastic job as per usual (why she never really ‘made it’ is a mystery. She was great in Jurassic Park and A Perfect World, and going back even further in that naughty little film known as Rambling Rose). 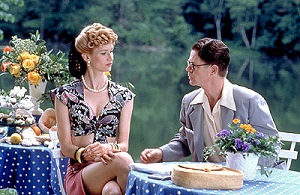 This film started out great. Suspicion and distrust ruled supreme in the ‘dream suburb’ setting so well. This kind of film plays out so well in such an environment. It worked for Shadow Of A Doubt, the Hitchcock film that was apparently the late great’s personal favourite, and more recently in films such as Arlington Road. It can be so much more interesting when there is something horribly insidious going on in the middle and upper class suburbs, rather than dark alleys and run down apartment blocks. This type of film can make you truly wonder about the nature of prejudice and mistrust, especially in such familiar environments.

By the time we got to the second half of the film, however, I was kinda bored. This didn’t really deal with anything I hadn’t seen before, and not being very familiar with the particular era in which it was set, I guess I wasn’t as concerned as I could have been.

The supporting characters were well played, particularly Meat Loaf, who is rapidly turning out to be one hell of a fantastic actor – who could forget his hormonally imbalanced turn in Fight Club?

Above all this film examines the nature of identity – how people perceive the differences between each other. Apparently ‘Arthur Miller’s most controversial work’, this film has a fantastic premise and a great beginning but tends to feel kind of tired during the last half hour.