I’ve always had a soft spot for Schumacher’s 1990 film, but it’s never had the cult status as his 1987 flick, The Lost Boys. Its premise doesn’t really leave much room for mixing up the formula either (not that that stopped Final Destination). And thirdly, Flatliners has never had the brand awareness from which the likes of, say, Fright Night benefitted. 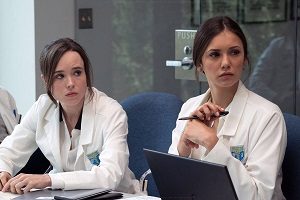 But, here we are, with a film from the director of The Girl with the Dragon Tattoo (Män som hatar kvinnor), starring none other than Ellen Page. And boy, is it a stinker. It’s the same story: a bunch of medical students decide to kill themselves – just a little bit – and then bring themselves back, in the hopes of exploring what happens when you find yourself in a tunnel, heading towards that bright light.

The cast are actually really good, particularly Page and Diego Luna. And when you focus on scenes in isolation, Oplev’s direction is solid too.

This version gets a lot of things wrong, however. The first thing I noticed was the complete lack of mystery. As of their first foray into death, we instantly know the cast’s past sins. The original spun the characters’ back stories out for almost the entire length of the film, whereas here we know right away what everyone did wrong. This complete lack of narrative tension is inexcusable.

But there’s something else amiss too, and I think it happened in postproduction. Whether the director walked, or the studio took it off his hands, or they ran out of money or whatever, it’s clear that changes were made…

First off, we have big VFX moments that make little sense in the context of the story. Then, we have last-minute VFX additions that appear little more than 2D inserts. Not once, but twice the film relied on a jump scare that was the equivalent of a “South Park” cut-out character sliding into frame. It would be hilarious if it wasn’t such atrocious filmmaking.

Later in the film, I noticed that one of the after-death “visions” featured the actress in a very distinctive top. I couldn’t figure out why they’d made that costume decision…until I saw her wear that same top in the real world 15 minutes later, in the climax.

It’s clear that Flatliners had a massive overhaul during postproduction. Whether there was a good film there beforehand is anyone’s guess. This isn’t a unified vision, however, and it’s a pity when the best thing about a film is the poster.