I had hoped that the renewed involvement of James Wong, co-writer and director of the fantastic original film, might somehow save the Final Destination series, but alas this isn’t the case. Final Destination 2 featured a brilliant opening sequence, then turned its attention into an admittedly bloodier but infinitely stupider collection of deaths, and had very little else to offer. Most significantly it resurrected a plot development deep-sixed from the original test screening of the film. 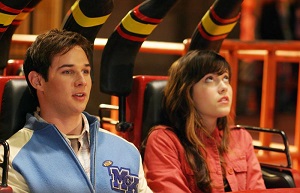 While Final Destination toyed with people’s fear of flying, the second film’s attention to road accidents was perhaps slightly less effective, considering that everyone knows about the dangers of driving yet very few worry about it. Number three focuses on perhaps a more effective fear: roller coasters. The build-up to what is now a Final Destination tradition – the initial tragedy – is brilliant, and the disaster itself doesn’t disappoint. However this is all FD3 has to offer. The deaths that follow are bloody but make little sense, and are above all LAZY. FD1 featured some of the best chain reaction-like death scenes ever put on film (think of your own house as a giant version of the game Mouse Trap and you’ll get the idea), and in installment number three we simply don’t have the same sense of cause and effect.

There’s very little depth to the cast of victims (ahem, I mean characters) even in comparison to the average slasher film, and Mary Elizabeth Winstead (Sky High) is the only actor to come off in a positive light. It’s only Tony Todd’s disembodied voice that appears in this film, which is a disappointment and again simply seems lazy.

The film ends in a terribly flat manner, and apparently is the product of a re-shoot, once more fulfilling a Final Destination tradition. There are no supremely stupid moments in this film, but all the same Final Destination 3 is rather dull. Unfortunately the series doesn’t end with a bang but rather limps away awkwardly, probably sobbing quietly to itself, and mumbling incoherently about past glories.