Thomas Bechuza’s film The Family Stone is a surprisingly intelligent and confident drama centring around a Christmas gathering. I say surprising because the trailer suggested nothing more than a seen-it-before feelgood comedy (albeit with an impressive cast). In actual fact the multiple narratives are brought together effortlessly to create an impressively true to life depiction of a large family and the conflicts that plague them. Diane Keaton is at the helm, and her brilliant performance is the keystone of the film. She is surrounded by a mostly flawless cast, who are varied enough to provide enough dramatic tension but at the same time form a convincing whole as the Stone family. Actually, ‘flawless’ may be going a little far, but I should point out that I find neither Dermot Mulroney (Must Love Dogs) nor Sarah Jessica Parker interesting enough to carry their own film. The former is looking more and more like Sylvester Stallone every day, and I could almost say the same about his actual performance – rather stoic and lacking in charisma. Sarah Jessica Parker’s Meredith is supposed to be the odd one out, and it seemed as if we should be siding or at least sympathising with her. This is hard to do, however, as apart from a two minute scene before the titles, we only get to see her through the Stone family’s eyes.

The fact that Parker and Mulroney were the central characters and yet I still liked the film is testament to the quality of the supporting performances. Rachel McAdams (Red Eye) is brilliant as the bitchy younger sister, and Craig T. Nelson (The Incredibles) delivers a powerful yet subtle performance that hints at the pain beneath his rather rational exterior. Luke Wilson proves in this film that he could have a decent career in ‘serious’ films if he so chose, and Claire Danes is wonderful as always, even if she gets very little screentime.

The Family Stone is a drama with a lot of character-based comedy, and it is only let down in the last act, which is a little too neat and doesn’t do justice to the rest of the film. I guess I should be thankful that the schmaltz wasn’t laid on until the very end, as a big ‘family Christmas’ movie always has the potential to make one want to gag. The script never lets us down, however, and there are practically no redundant lines or gratuitous exposition. In fact a lot of the film’s dramatic pull lies in what isn’t said, and some of the quieter moments featuring no dialogue are the most powerful.

An extraordinary cast and great direction make The Family Stone solid viewing, even if it fails to maintain its integrity towards the end.

‘Holiday’ movies seem to share a consistently small number of themes – family dysfunction is certainly the clear leader from feel-good schmaltz and then daylight to third – and yet The Family Stone, whilst flirting with these limitations, at least attempts to broaden its horizons. Covering the search for self awareness, illness and healing, grief, racism, homophobia and the bizarre expectations we continue to carry for Christmas, there is almost too much on show, and some get short shrift. The Family Stone is, however, a worthy attempt. 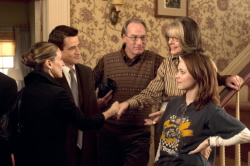 Focussing mainly on the introduction of ‘black sheep’ Everett’s soon-to-be fiancée Meredith into a large family, with the obvious humourous moments that sadly aren’t that amusing, The Family Stone suffers for a lack of charisma in either Dermott Mulroney or Sarah Jessica Parker. Neither lift their Everett or Meredith above caricature, and yet both had the opportunity in some truly dramatic sequences. Parker, although somewhat better than Mulroney, is forced to play so straight and prim in the early parts of this film, we never really get the chance to see her fears and ambitions until it’s far too late for us to feel empathy toward her. Mulroney, who recently failed to really connect in Must Love Dogs, is definitely provided with the most opportunity for character growth, but fails to deliver. The limitations entailed by having the two lead characters so unsympathetic are never really overcome.

Surrounding these two inadequate lead characters, however, is the most extraordinary collection of performers and roles. The stand-out is obviously Diane Keaton who gives the matriarch of this warped family such humour and fun, as well as an obvious love and affection. Sybil is a wonderful character, and she is brilliantly played. Alongside her, Craig T. Nelson gives one of his best performances in my recollection as her afflicted husband. He is wise and yet his soul is in turmoil, and his dinner table exploits are a dramatic highpoint.

Claire Danes, Rachel McAdams, Luke Wilson, Tyrone Giordano and Paul Schneider are all excellent in smaller roles. McAdams in particular just seems to have so much presence, one’s eyes immediately follow her whenever she is in shot. After a massive year in 2005 with Red Eye and Wedding Crashers before The Family Stone, I can’t wait to see what she does next. Luke Wilson deserves special mention also, as a consistently under-rated performer who should certainly be given more opportunities than he currently receives.

The end sequence is moving, although writer/director Bezucha has certainly attempted to bring everything together a little too neatly. There is a suspension of disbelief required to accept some of the final actions of his characters, that don’t quite gel with their previously demonstrated qualities. I am, however, a sucker for a happy ending, and The Family Stone provides that in spades.