In the search for a fresh take on what is obviously perceived to be a tired genre, screenwriters have recently taken the plots of romantic comedies to further and further depths of stupidity. Failure to Launch continues this disappointing trend, perpetuating the slide in quality of this once-beloved form. 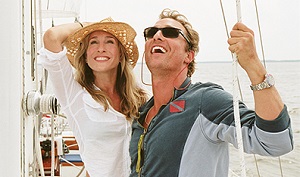 It used to be that a man and a woman would meet one day, perhaps in somewhat quirky circumstances, or in a minor misunderstanding of some sort, then spend 90 minutes sorting it out before finally ending together in a moment the audience always knew was coming and would respond to with a light-hearted smile of contentment. This worked for years, but seemingly is no longer enough. Failure to Launch starts with the most absurd of premises – the woman with an imaginary job who must force a man to love her to fulfil her contract, and the man with seemingly no job at all but enough money to buy a Porsche and live a porn-star lifestyle – and actually gets worse after that. It’s almost as if the writers were trying to write the worst movie imaginable, although admittedly they are let down by an appalling lack of chemistry between the two stars.

Matthew McConaughey (Tripp) and Sarah Jessica Parker (Paula) have both carried romantic comedies before (How to Lose a Guy in 10 Days, The Wedding Planner and ‘Sex and the City’ respectively), and yet they wander around in Failure to Launch feigning interest in each other for the cameras but never creating any tension or spark. Admittedly, McConaughey’s romcoms haven’t been good, but ‘Sex and the City’ is an icon of its time, and yet Parker performs well below her best. When they do finally get their wires uncrossed, it comes in a moment of such absurdity and so against the trend of what has led to it, one suspects no-one could have convinced a tired and disinterested audience to care, but certainly others would at least have tried.

It seems Director Tom Dey was also suffering from a case of the ‘no shows’, as there are moments that just slip away that should have been capitalised on (usually involving Kathy Bates or Zooey Deschanel, both of whom are excellent but are debased by their appearances here), and other sequences that shoud have never have been filmed, or at least should never have left the editing suite intact. One such is the ethical dilemma of whether Paula has crossed over into prostitution, which is signposted throughout by herself and other characters as it should be, but later dismissed in favour of not requiring anything difficult of either the characters or the audience. This is blatantly dishonest, and smacks of arrogance or disinterest or both. Why set up an issue if you’re not going to deal with it? You can’t have it both ways.

When the ‘comedy’ component of the genre title is so obviously lacking that artificially inserted and uncomfortably put together scenes of animals biting our hero are required to provide amusement, it must have been a clue to somebody in Hollywood that a moment of pause and reconsideration may have been in order before signing off on all the money. Yet Failure to Launch was always going to pay its debts (and is – having cost US$50 million plus marketing, it has so far taken just under $100 million worldwide), due to the fanbase Parker accrued in her years leading the ‘Sex and the City’ cast, and it seems the little things were overlooked in the rush to the bank. Little things like plot, script, chemistry between the stars, wit, intelligence and good taste.

←Grave of the Fireflies Scary Movie 4→