Fahrenheit 9/11 successfully follows Bowling for Columbine in Michael Moore’s one-man crusade against right-wing America. It carries the story from ‘Stupid White Men’ and ‘Dude, Where’s My Country?’ a lot further, particularly in his vilification of George W. Bush. Whether this film will achieve its stated aim of helping to remove Dubya from the White House remains to be seen, as it felt to me like preaching to the converted – especially when the bedraggled, goatee-wearing, beanie-clad, smelling-like-dope patrons in my preview screening applauded vigorously at the end…

Michael Moore is a master of political satire, blending sharp commentary, critical vision, and boundless energy and personality. He has become the much-loved propagandist of the left-wing, the only voice capable of actually communicating with the disenchanted American voters. Or so his press would tell us. From my ‘expert’ opinion on the other side of the world, he does seem to dominate the left-wing campaigning – perhaps it’s different on the ground. Either way, he is extremely competent, and he is getting his message out.

Moore’s demeanour is always caring, thoughtful and considerate. He has been criticised for his use of the downtrodden in his documentaries, but he seems always so innocent in this regard. Taking shooting victims to a gun manufacturer? Taking the mother of a dead soldier to the White House gates? Not many could get away with such behaviour with reputations intact – we demand a lot more of more ‘regular’ journalists. But Moore’s charm is in getting away with such stunts.

It is his use of such people that injects his films with the reality we can relate to. Although I found Lila Lipscomb a little odd at times, it’s impossible not to be moved as she talks of her dead son. More sad though is her story of actively encouraging her children to join up – the only work going in Flint, Michigan, Moore’s hometown. I found her tale of patriotism another example of why such fanatical acceptance of any belief, in this case American righteousness, is such a destructive force in our society. Much like Osama, this is her warning. She seems to have blindly followed the party-line, never actually considering her children may face active duty, and to be shocked that her son’s life could be taken in such an endeavour. Who is more to blame? Dubya or the ‘America is wonderful’ zealots who follow him so uncritically? Moore clearly sets up Mrs Lipscomb to be a subject of sympathy, but to this viewer, at least, it partly backfired.

Moore has been criticised for taking liberties with his ‘facts’. I can’t tell from my position if that is fair or not. To me, his argument is cohesively structured, and builds nicely to the inevitable conclusion. Sure, he liberally uses provocative images to make his point, but so did the administration when arguing their case for going to war in Iraq. The charred bodies of soldiers being beaten by Iraqi’s in the streets is awful, but so are the scenes where American soldiers make fun of captured prisoners. We have been blocked from seeing much of the horror of the war, and maybe he does us a service by showing us footage not otherwise available.

Fahrenheit 9/11 is a challenge to all of us to think for ourselves, and once again Moore has packaged his challenge in the form of entertainment. This film is not as entertaining as Bowling for Columbine, nor is it as brilliant in communicating its message. Whether it helps topple Dubya we will know in a few more months.

There were a lot of expectations regarding Michael Moore’s second globally released feature documentary, and I think in most cases Fahrenheit 9/11 delivers.

The first thing that should be said about this film is that it’s not as funny as its predecessor Bowling for Columbine. Obviously the stakes here are much greater, and as such Moore has recognised that there is less room to laugh. 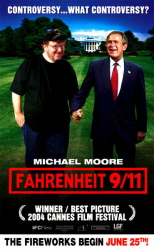 I was a bit disappointed in the first half hour or so of Fahrenheit 9/11 because I had heard him relate the same information in his book ‘Dude, Where’s My Country?’. A lot about the election of Bush Jnr and his actions surrounding September 11th, 2001 was unnecessary for one who had read the book. But, luckily much of the rest of the film was new to me, and in all fairness the film has to take into account that not everyone has read his book.

There’s no denying the power of the images we are presented with in Fahrenheit 9/11. These are shocking images that you won’t see in any news broadcast, and this is very important when we have a media that delivers only a sanitised version of events (ie: those pretty green lights in the night sky we see on the news are actually killing people). There are some truly ghastly images from Iraq that drive home exactly what happens in war (no matter how surgical the strikes may be). There are dead men, women and children whose bodies are barely recognisable as human. Of course there is a political agenda here, and much as I agree with Moore’s standpoint, I don’t think anyone could leave the cinema without feeling a profound sense of sadness, if not horror at the multiplicity of tragedies that have occurred in recent years.

It is significant to note that there are absolutely no images of the World Trade Center Towers in Fahrenheit 9/11. I think that Moore has cleverly decided that it’s about time we saw something other than that much-used footage, instead devoting that particular passage in the film to the reactions of the people in New York on that day. Once again the true horror of what occurred can only really be conveyed if we see the people, not the exploding buildings.

Fahrenheit 9/11 is aimed at the American public particularly, and as such a large portion of the film is devoted to the results of Bush’s actions on the American people. It must be remembered that Moore’s primary aim in this film is to get rid of Bush Jnr. Some of these sections (including focusing on the families of soldiers in Iraq) may be a little too much for the global audience, but it’s important in driving home the fact that America’s drastic global policy adversely affects Americans also.

I think this film deserves the recognition it has received even before it has been released (with the reception at Cannes for an example). This is a powerful documentary that delivers a viewpoint otherwise underrepresented in the global media. Go and see it. Open your eyes.