This is exactly the film all us fantasy geeks dread. The type of flick to which non-believers respond with ‘see, we told you so… fantasy’s nothing more than silly kids’ stories with dragons and magic swords’. In their defence, yes, fantasy fiction is silly, but that doesn’t mean it can’t be worthwhile. 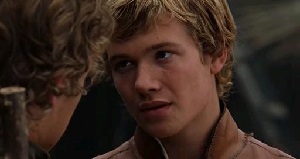 Ever since The Fellowship of the Ring, studios have been rather accepting of the fantasy genre (no small feat considering their potentially enormous budgets), though few have compared favourably with Peter Jackson’s trilogy. Where are the other really good fantasy adaptations? ‘The Chronicles of Thomas Covenant’ or ‘The Wheel of Time’ or Robin Hobb’s ‘Farseeker Trilogy’? There have been some easy targets – Harry Potter, The Lion, the Witch and the Wardrobe, and some more obscure ones (such as the upcoming Bridge to Terabithia, which seems to have seriously upped the fantasy content), but few have managed to be consistently high-quality productions.

Now comes Eragon, from a tale originally penned by fifteen year old Christopher Paolini. Considering the book’s success, this was a bit of a no-brainer for studios in terms of ‘should we make this film?’, and the cash-in element shows. Stefen Fangmeier has crafted a film so much like A New Hope that it’s not funny. To be fair, I’m sure Paolini took some inspiration from Star Wars (farm boy raised by uncle in a time where evil pervades the land; a long forgotten race of dragon riders who command magic etc), but in Eragon we even have similar cinematography! Just wait til you see a saddened Eragon standing before a sunset whilst the music swells passionately.

The cinematography is actually one of the strong points, and while we’re on the topic why don’t I list the film’s positive achievements? It won’t take long…
1. Jeremy Irons. He’s great, even though he’s spouting some particularly atrocious lines.
2. The cinematography. Oh wait, I’ve already done that one.

Everything else is awful. The special effects budget needed a lot more money. The dragon Saphira (voiced by Rachel Weisz) looks a little too much like a My Little Pony for my liking, and the effects are rarely ever coherent (lots of blurring and smoke effects) let alone realistic. What is it with dragons? Only The Lord of the Rings and Reign of Fire have ever crafted decent ones. The orchestral score is horrid – a cloying mass that continually telegraphs the upcoming drama (as if we couldn’t work it out ourselves).

Then there’s Ed Speleers. His acting is fine, considering how little he has to work with, but as an Aryan/Luke Skywalker look-alike he gets pretty annoying. Sienna Guillory is pretty good as Leia… I mean Arya, and Garrett Hedland is pretty awful as Murtagh. And then there’s John Malkovich, who puts in about two minutes’ screentime.

Fans of fantasy fiction can sit back and hope for a decent offering, and others can groan, but meanwhile any Eragon sequels can only improve on the original.