Cameron Crowe’s “coming-of-age, romantic comedy, drama, road movie” tries so hard to be a bit of everything, but sadly fails to be truly great at anything. There are some fantastic moments when it hints at being wonderful, but the excess padding and lack of direction mean Elizabethtown only passes as ‘entertaining’. Drew Baylor seems to have the perfect life – he is a brilliant footwear designer for a major shoe manufacturer, has the perfect girlfriend, and very little contact with his family back home. When it all comes crashing down to the tune of a $972 million loss disguised as the ultimate in sporting apparel (the bizarrely named ‘Späsmodica’), he becomes aware of the meaninglessness of his life if he isn’t a success. A chance meeting with a flight attendant, however, could change everything…

This plot has the potential to be a great romcom, or a fantastic values/life-in-crisis piece (in the vein of another Crowe film, Jerry Maguire), but by trying to be something different every few minutes, it loses direction and squanders its opportunities. Elizabethtown is strongest when being a straight-out romantic comedy – Bloom and Dunst share a wonderful sequence on the phone that is absolutely charming. Their meetings and misunderstandings, and the eventual beginnings of a relationship, are adorable. The ‘road trip’ portion, which serves as a visual proxy for their developing attraction and the ‘getting to know each other’ phase of their relationship, also works. Crowe always seems dissatisfied with just hitting the notes for a romcom, however, and continually tries to inject drama.

There are dramatic sequences that work well too, it’s just that the meandering between comedy, romance, drama and coming-of-age film leaves one not entirely sure how to feel at any point in time. Susan Sarandon’s climactic speech works brilliantly for example, and manages to capture all the emotion of her reunion with her estranged in-laws – anger, frustration, and finally acceptance – but other attempts to darken proceedings don’t manage quite so well. The unnecessary subplot with Drew’s cousin Jessie (Paul Schneider) and his father and son issues is one such thread. The running time was originally 135 minutes, and was evidently edited down to 123 minutes at the request of the studio, and yet it still seems overlong and bloated. There is a lot of filler – Chuck and Cindy’s wedding is given far too much attention, the aforementioned father-son-grandson subplot, and even several of the scenes between Bloom and Dunst could have done with more brevity. Perhaps with a single intention this could have been made to flow more readily, but by trying to achieve so much, it fails.

Being a Cameron Crowe film, the soundtrack is incredible, and is in fact one of the highpoints. Crowe has such a way with song selection, and uses music to provide additional punch to big moments with aplomb. The rendition of ‘Freebird’ by Jessie’s band is a wonderful scene, and the road trip compilation is exceptional. It seems a shame the onscreen action had less focus than the brilliant soundtrack.

In spite of reasonable leading performances by Bloom and Dunst, an excellent soundtrack, and some truly wonderful individual scenes, the lack of overriding direction and inadequate editing of filler material limit the impact of what could have been a poignant film about growing up and finding oneself. It is enjoyable, funny at times, moving at others, but could have been so much more.

I’d have to agree with Mark here. Elizabethtown does provide glimpses of the great film it could be, but unfortunately that’s all. 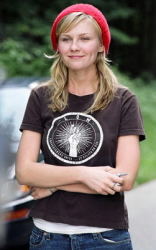 The major problem with Cameron Crowe’s latest is that it’s in dire need of some editing. The film is way too long, especially when all I wanted to see was the scenes between possibly the two prettiest people in the stratosphere. The wake scene in particular just went on and on, reminding me of the hideously long party at the beginning of The Deer Hunter.

Kirsten Dunst (Wimbledon) is appealing as always, although I am her weakest critic. She does conform to the current romantic comedy stereotype: an upfront, in your face girl who seems to be a borderline stalker. Of course, this is probably a fantasy for many of us guys, insofar as we could leave all the work up to her, but isn’t it about time we saw a romcom where the guy at least had to try to get her? From Eternal Sunshine of the Spotless Mind to Garden State to Me And You And Everyone We Know – they all featured this type of female lead.

Orlando Bloom (Kingdom of Heaven) is less impressive, probably cos it’s the first time I’ve seen him not brandishing bow and arrows. There’s something not quite right about his American accent, which is especially noticeable in the voice overs. His comedic moments feel a little contrived also.

There are some great moments in Elizabethtown, but they seem kind of cobbled together. The film easily gets distracted and often spends time focussing on peripheral characters. As Mark mentioned, Paul Schneider’s (All The Real Girls) subplots are unnecessary, and Susan Sarandon (Alfie) is great but it felt at times as though she was making some other film.

Overall it feels as though Cameron Crowe was getting lazy. If the script had been tightened, and gratuitous moments severed from the film in the editing stage, this may have been a great film.