It seems appropriate that Viggo Mortensen – one of this generation’s greatest exponents of the technique of method acting – should play a Russian in Eastern Promises, given the technique’s origins as Stanislavski’s ‘system’ in the early part of the 20th century. Once again, Mortensen dominates all those who share his screen in a performance so engrossing he must surely be rewarded at Awards time. Anna (Naomi Watts) is a midwife in a busy London hospital, and delivers the baby of a young Russian prositute who then dies from a placental abruption. In her quest to find a family for the orphan baby girl she calls Christine, she comes across a diary that will threaten the lives of those she loves and the men who caused a 14-year-old girl to be in such a state. A shaky alliance with the driver (Mortensen) for a Russian mob boss will lead to unexpected consequences for them both.

Eastern Promises is at times a brutal film. Scenes are filled with casual violence and the audience is privy to all that occurs – none of the suggestion of things unseen for Cronenberg. The treatment of the earlier sequences allows the nature of these men and their world to be realistically brought to life, and seems far more effective than screen violence that is flagged ‘look at me’. As the tension quietly builds leading to the crucial developments that are hinted at throughout, the final release is a scene of ferocious barbarity that may live with the viewer for some time.

Mortensen is stunning in the lead male role, completely immersing himself in his turn as Nikolai. His accent, demeanour and even body language are all spot on. He is paired with Watts who, although she doesn’t shine as brightly as her costar, does exactly what is asked of her in a relatively unrewarding character. Armin Mueller-Stahl is suitably menacing as Semyon, however Vincent Cassel plays his son Kirill as too much of a dropkick ever to succeed in the tough world they live in.

Shot as a bleak view of the less visible side of London, the menace of the action is complemented brilliantly by the darkness of the cinematography. Sound and set design add to the overall sense that this place exists… and you’d better try to avoid it.

Eastern Promises has very strong claims as one of the best films of 2007, and not only due to the startling performance of its leading man. It is an immersive experience that evokes what seems to be the reality for a segment of society far less fortunate than many of us.

I enjoyed this film more than the overrated A History of Violence.

For me, it feels that Mortensen is finally getting roles he can sink his teeth into. Up until The Lord of the Rings, his appearances actually annoyed me (A Perfect Murder springs to mind). Here he well and truly loses himself in Nikolai. Even being subjected to his chin dimple didn’t bother me, and that’s saying something. Naomi Watts is great, though has a rather thankless task – Anna conforms to a fairly single minded, maternally driven archetype. She drew the short straw when it comes to character depth, especially compared with the moral challenges the men have to face. Armin Mueller-Stahl is fantastic, and his mob boss figure is chilling, showing nothing but calm resolve as he decides who lives and who dies. 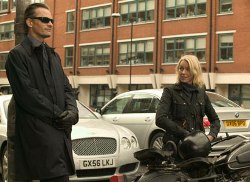 This is easily his best role since Shine. One of these days I want to see Vincent Cassel play a nice guy, maybe in a mushy romantic comedy. Here, as the idiotic and spoilt son of Semyon (Mueller-Stahl) he once again seems to view acting as a competition to see who can create the least likeable character.

Like A History of Violence, Cronenberg doesn’t shy away from depicting the consequences of violence, and I think in Eastern Promises he has struck a very tricky balance. Hollywood has a penchant for revelling in violence without consequences (The Matrix being the supreme example), but here it almost feels as if the director was actually being responsible by not shying away from the gore. Rather than gratuitous, it felt justified, and far from glorification.

Cronenberg is an auteur who has recently moved away from the films that made him famous. Like Spike Lee, who segued into new territory with Summer of Sam, 25th Hour and Inside Man, Cronenberg’s new films are quite obviously a new chapter in his career. Beginning with the underrated Spider, he has recently taken a more real world approach, though it’s still an exaggerated reality. The fact that there are no oversized bugs in Eastern Promises is proof enough of this, though his obsession with our bodies being more than just flesh is still apparent.

The film’s only flaw is perhaps its predictability. In terms of plot, there are no surprises whatsoever. It has a beginning, middle and end, but no real twists along the way. All the same, it’s compelling viewing.

←Saw IV Conversations with My Gardener→