Brit Marling, Alexander Skarsgård and Ellen Page. If the idea of all three of those actors in the one movie together is enough to get you interested then we have something in common.

Not enough? Okay. How about if I told you that The East is the third film – after Another Earth and Sound of My Voice – co-written and starring Marling? That do anything for you? 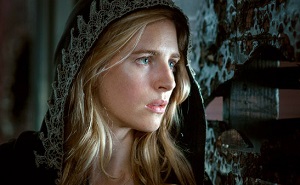 Well, it should. If, however, you are much more normal and need to know something about a film itself before committing, then I’ll let you in on the premise. Marling plays Sarah, an undercover agent working for private intelligence firm investigating an anarchist cell. The cell, known as the East, aim to bring to light the kind of damage done by large, multinational corporations in the pursuit of profit.

Sarah, like a lot of Marling’s characters, is a woman slightly out of step with the real world. As an undercover operative, she can’t divulge any information about her work to her boyfriend, so she spends the majority of her waking hours professionally lying. This means she’s always walking a tightrope of sorts, and if you’ll permit me to mix my metaphors for a moment, it’s a tightrope suspended over a sea of moral ambiguity. It comes as no surprise that the moral conflict is constant in The East. We see blinkered, dogmatic views from everyone, whether they be Sarah’s employer, the anarchists or the big corporations that they are targeting. And of course, Sarah is the one stuck in the middle. Marling is perfect in the role.

Skarsgård, Page and Tony Kebbell and Shiloh Fernandez comprise the main players of the anarchist cell. Whilst they have a common aim, their characters are treated as independent entities, frequently disagreeing on their methods. It was a little disappointing that Page’s role isn’t very large – I was expecting to see more of her – but she still leaves a bold impression during her limited appearances.

The major problem with The East is that the screenplay fumbles rather critically in the final act. An abrupt change of gears that doesn’t quite ring true, it’s a pity because the narrative feels organic up until that point. This means that what could have been a brilliant film ends up being simply a good one.