Kevin, Kevin, Kevin… What are we going to do with you? Ever since you did the canine jig you’ve been stumbling around like a lost puppy, looking for praise wherever you can find it.

Kevin can often been seen wandering the city streets, tail between his legs hoping for someone to pat him… Won’t you people understand?! Kevin is for life, not just for Christmas!

Okay, I’d like to officially apologise for whoever wrote the above few sentences…I just came back to my computer and they were here, grinning madly at me. I would never be so callous and rude to an actor of his calibre. 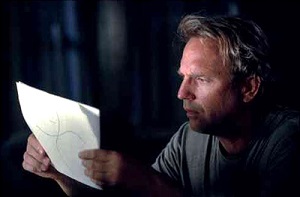 The problem of Dragonfly is that you can hear the shout that went out over the major Hollywood studios a few years ago. It went something like: “HEY!! THE SIXTH SENSE IS MAKING MEGA-BUCKS!! QUICKLY, SOMEBODY DRUM ME UP A SUPERNATURAL THRILLER SCRIPT, AND GET IT TO MY DESK, PRONTO!! ANYTHING WILL DO…AS LONG AS IT HAS SOMETHING TO DO WITH THE DEAD TRYING TO COMMUNICATE WITH US!! PLEASE, ANYTHING!! AS LONG AS IT’S NOT A PET SEMETARY SEQUEL!!”

Okay, so admittedly some of the films that have conformed to recent trend have been great (Stir Of Echoes, The Others), and it’s possible that they were made concurrently, and weren’t necessarily trying to imitate The Sixth Sense. But unfortunately Dragonfly cannot live up to the standard of those films, in fact it doesn’t have much Sense at all.

Once again I have no idea who wrote that…

The thing is, I like thrillers, even the crappy ones. So for me to be so nasty about this film means that something must be seriously wrong with it. It’s just so try-hard. It telegraphs the scares that are going to be appearing later on, but in a completely serious manner, rather than the tongue-in-cheek mood that permeated the set up of The Others.

Dragonfly is just plain silly. And that’s even taking into consideration the cool supporting cast which include Ron Rifkin and Kathy Bates. Although I must admit since Buffy, every time I see Ron I expect him to have a tail and attack someone with his really long tongue.
And Kathy Bates…I have a thing for Kathy. I think she rocks. In fact I’m thinking of starting up a fan club. Kathy can tie me to a bed and force me to write a novel any time. But the sad thing is she is wasted on this film. She’s delivering lines such as ‘I’m a lawyer, I need evidence’, much like the rest of the cast that are forced to play out their roles with some kind of blunt instrument rather than being given subtle characterisations with which to work.

As you may have guessed, I didn’t really like this film. But most of my criticism is aimed at the disrespect shown to the audience, rather than bad filmmaking per se. It’s a well made film. Like most Hollywood pictures, it’s well shot and edited, and the music is good. It’s just that it persists in promoting a weak plot with lazy characterisations. Films like these are irrevocable proof that there is actually a ‘write script’ button on computer keyboards in Hollywood.