Fans of the original 1993 PC game ‘Doom’ and its sequels are sure to be amused by the antics of Dwayne ‘The Rock’ Johnson and Karl Urban as they go head-to-head with the mutant scientists, dobermans and marines in the big screen adaptation. Whilst sporting an unintelligent, unoriginal and uninspired plot, the use of First Person Shooter gimmickry and lots of bullets make this a fun excursion to an underground research facility on Mars. Buried under the Martian surface, but aligned with the mysterious portal ‘The Ark’ that allows Mars-Earth travel instantaneously but was built by creatures of unknown origins, lies the research station that is about to unleash a cavalcade of monsters on an unwitting human public. The only thing that can stop them is a band of marines lead by Sarge (The Rock) and Reaper (Urban), who travel to Mars to contain the mutants and stop anything returning to Earth.

Complicating matters is the presence on Mars of Reaper’s twin sister, who as an employee of the Union Aerospace Corporation has questionable motivations, and the tension between siblings enhances this further. Almost immediately they arrive, however, the marines start getting picked off, and we meet all manner of creatures, hungry for flesh.

That this set-up is absurd is not the point. Nor is the fact that the tension between Reaper and his sister, or Reaper and Sarge, is trite and shallow. The point is the shooting of many, many rounds of bullets, and Sarge’s use of the BFG. (‘Bio Force Gun’ in the film – although Sarge helpfully renames it ‘Big Fucking Gun’ in case we were uncertain of its heritage as a beloved weapon from the game.) This is a very silly film, full of pop-science about genomes and chromosomes, and seems to have been made predominantly to show off some great creature effects.

For anyone with even a passing acquaintance with the game, many similarities exist, and many things will be known in advance. Certain characters’ future roles will be obvious, for example. For anyone who has ever seen an action film before, the likely order of death of team members and eventual survivors will also seem clear from the outset.

The action sequences are reasonably handled, although they’re often hard to follow, being shot in the darkened passages of the station and then edited in the ‘rapid cut & handheld’ style I find abhorrent. That said, there are several great moments of shock, and one fight scene between human and monster that Stuart will love for its reality-based approach.

The dynamic between Urban and The Rock? Well, let’s just say that The Rock has his pants pulled down by Urban, who seems only half switched on himself. Their relationship is surprising, although the eventual outcome between them is not. The remainder of the cast, played by nobodies, are all lumped with uni-dimensional caricatures, and appear onscreen accordingly.

The most game-like aspect of this film occurs with the five minute extended sequence of first person shooter style action. This is so much fun, and for anyone who has ever enjoyed a FPS game it will be immensely enjoyable. The dipping, reloading, and firing of the weapon – and the use of a chainsaw, yeah! – reminded me so much of the original game, and I simply adored this section.

While Doom is hardly worthy of the title ‘film’, it remains fun to those of us who have ever shot at mutant zombies or aliens in anger. Whether it will appeal to those not weaned on such fare remains to be seen, but if you grew up fighting your way through Martian research stations like I did, this may be for you.

I can’t imagine anyone being pleased with this film. I may not be an avid player of the games, but as far as I can tell this film bears only a slight resemblance to them. 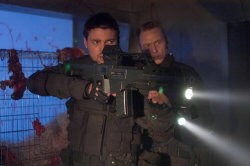 If anything this is a watered-down version of the computer games I remember from the 90s. There’s only a slight selection of the near-legendary weaponry featured in the PC game – there’s no plasma rifle, no shotgun, and the BFG 5000 makes only a brief appearance. There are no floating demon heads spewing fireballs, in fact there are no demons at all. What we have in Doom the movie is in fact a tired Resident Evil type narrative.

The bizarre thing about Doom is that there is nothing particularly bad about it. Sure, there’s lots of inane dialogue, and some futuristic technology that fails to make any sense, but for the most part the problem with Doom is that there’s nothing good about it. It’s dull. In fact the most exciting part of the film was the credits, and that was just because they featured Nine Inch Nails’ ‘You Know What You Are’ (which is an insult to NIN, even taking into consideration that Reznor obviously has a soft spot for shoot ’em ups, having done the original ‘Quake’ soundtrack). The only other things Doom has going for it is some slightly misleading marketing and the highly anticipated first person ‘in-game’ type moments. The latter only feature for a very short part of the film, and whilst inventive, aren’t exactly as immersive as you’d hope.

The majority of Doom features a bunch of guys dressed in black walking around black walled corridors that only seem to be lit only by kids’ nightlights. YOU CAN’T SEE A DAMN THING. A couple of glowing eyes, some muzzle flashes and quick editing – that’s all the audience has to work with. The action scene Mark suggested I would like certainly was the best moment in the film, however I couldn’t actually see what was going on. 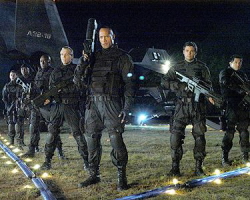 The narrative chapters of Doom are interesting, if only for the fact that they could have spun a wheel to determine the order of scenes (and they probably did). This film had a very simple recipe: take the only two ingredients – obscured yet noisy action, and inane exposition – and stir together until you’re left with a bland sticky mass. I could quite easily make use of the usually worthless ‘program chapter’ function on my dvd player, and reorder the scenes without actually damaging the narrative integrity of the film.

I imagine that The Rock (Welcome to the Jungle (The Rundown)) will be the only actor to escape this stunted clutter of tired cliché with his reputation intact, and this is only because a: he doesn’t have one to uphold in the first place, and b: he seems so damn sincere. Karl Urban (The Bourne Supremacy) is as dull as the script, as are the rest of the soldiers. And Dexter Fletcher deserves so much more than this! The poor guy, who provided us with the wacko Soap from Lock, Stock and Two Smoking Barrels, and the unforgettable Spike from TV’s ‘Press Gang’ is relegated to the position of comic relief here, with no actual funny lines.

Worse than I expected. As if that were possible…

←Into The Blue Dark Water→