The extraordinary story of Jean-Dominique Bauby, one-time editor of Elle Magazine is told in The Diving Bell and the Butterfly, based on his memoir of the same name. 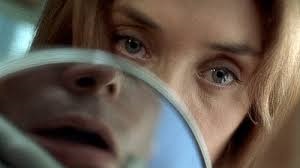 We begin the film as Jean-Do (Mathieu Amalric) wakes up from a coma, and learn the same time he does that he is completely paralysed save for his left eye. The first portion of the film is presented almost exclusively from his perspective, with doctors and loved ones peering into frame, and it wonderfully recreates the experience for us. The images are often blurred and fleeting, and we get to know every corner of his room at the hospital. We feel his frustration at his inability to respond to their comments (thanks to his ever-present voiceover), and his horror when casually told that they will have to take drastic action on his right eye.

There’s something terrifying about this tale. It’s a real life ‘Johnny Got His Gun’ scenario, except the stroke was completely unheralded (as is usually the case with strokes) as Jean-Do was merrily going about his life. The flashbacks are shot conventionally, and about halfway through the film opens up to shoot scenes from both perspectives. It must have been tempting to present the whole movie from his POV, but the end result is perfect – we need to understand what those around him are going through also.

I am told by friends who have read the book that the portrayal of Jean-Do is a little more positive than his own admissions, nevertheless it is the astounding generosity of those around him (his ex-partner, his speech therapist, his friend) that make this film really moving. Once we are introduced to the method of communication devised by his speech therapist, Henriette (Marie-Josée Croze), we go through the painstakingly slow process as he blinks once for yes and twice for no.

This is a beautiful film, in both senses of the word. The images are stunning (if a little disorienting to begin with), and the narrative jumps around quite a bit, but I can’t imagine a better way in which the story could have been told. Significantly, the tale is kept rather upbeat, thanks in part to Jean-Do’s sense of humour, not to mention the irrepressible nature of human determination in the face of astonishing obstacles.

The Diving Bell and the Butterfly