There’re three things you have to remember when you decide to tackle Hitchcock head-on. One: you’re an idiot; two: it’s unlikely you’ll measure up favourably to the master; and three: you’re an idiot. To be fair, directors intentionally and unintentionally channel Hitchcock regularly, but it’s a rare fool brave enough to remake one of his classics. We all know how well Gus Van Sant went with Psycho, and whilst Disturbia is an ‘unofficial’ remake of Rear Window, it doesn’t stray very far from the original at all. 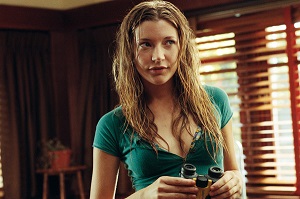 The problem is that just about everyone is familiar with Hitchcock’s film. If they haven’t seen it, they either simply know about it (through cinematic and cultural osmosis) or have watched a parody such as in ‘The Simpsons’. So it’s unlikely anyone will really be surprised by Disturbia. It does take its time to get to the ‘hey, that guy next door’s acting dodgy’ bit, and that first half hour has some interesting characterisations and events that upon reflection add very little to the main plot. The brilliance of Rear Window was that it really confined itself to that room – the boundaries were set from the first frame. David Fincher’s Panic Room stuck pretty close to this formula also.

There’s so much high-tech paraphernalia in Disturbia that it’s hard to believe young Kale (Shia LeBeouf) would ever suffer from cabin fever whilst under house arrest for three months. He may be without his iTunes and XBox live, but it seems he has every other battery-operated gizmo under the sun at his disposal anyway. That being said, it is LeBeouf’s performance that holds this film together. He delivers just the right amount of sincerity mixed with a self aware smugness that you don’t mind sitting through such a predictable plot. His offsider Ronnie (Aaron Yoo) is similarly brilliant, but unfortunately it’s another story with girl next door Ashley (Sarah Roemer). My girlfriend made the point that writers Christopher Landon and Carl Ellsworth seem to have the teenage boy speak down pat, but are completely in the dark when it comes to female characterisations. Ashley is little more than the physical manifestation of a wet dream, and her character is fraught with irrationalities and inconsistencies. Also, someone seems to have told Roemer that the only way to perform is to constantly sex it up, batting eyelids and posing every second she’s onscreen. Thus instead of falling for her rather otherworldly symmetry, we’re being put off by the fact that Ashley thinks she’s the hottest girl on the planet, which isn’t attractive in the slightest.

To be honest, some of the romance in the film is effective, though the writers too often let that overshadow the thriller aspect. There is an awkward shifting of narrative gears whenever they attempt to get back to the main story.

David Morse hams it up in a the role of the suspected psycho, but doesn’t do it enough. He’s not chilling and he’s not over-the-top, but in fact rather bland, which is a pity considering how much he could have done with the role. Carrie-Anne Moss is great in the few moments she has onscreen.

Disturbia is a cramped, impatient version of Rear Window that should have realised that when it comes to enclosed space thrillers, less is more. It is entertaining, but only if you don’t think too much.