This neat little morality tale is a rather simplistic but charming film carried by several fantastic performances. 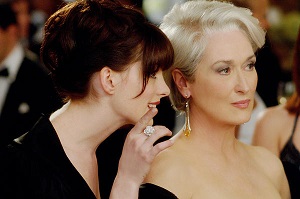 Meryl Streep continues to prove that she is a gift to the human race. Her performance is nothing less than stunning, and makes no concessions in the interest of a quick laugh. She breathes this role and the ruthless Miranda Priestly is incredible to watch. The forever adaptable Stanley Tucci is fantastic as the camp Nigel and Anne Hathaway hits all the right notes as Andy Sachs, newcomer to the horridly bitchy and overwhelmingly stylish world of Runway Magazine. Unfortunately this isn’t a role that really allows for much variation on Hathaway’s part – she’s dorky and loveable and charming, and her heart’s always in the right place, but she has no edge. This fish out of water tale isn’t really too far from The Princess Diaries for her. The only time I got to see her truly stretch her acting wings was her brilliant turn in Brokeback Mountain. Lastly Emily Blunt (My Summer of Love) is also perfect as Andy’s rival, and director David Frankel seems to get strong performances from the entire cast without letting anyone go overboard.

Truth be told, Andy’s ‘journey to the dark side’ isn’t really convincingly developed, and her boyfriend Nate (Adrian Grenier) is so underdeveloped that his entirely valid responses to her transformation come off as whiney and immature. But all this is easily overlooked in such a slickly presented and well-acted film. With never a dull moment, this is just the kind of enjoyable no-brainer that’s a joy to watch.

There’s nothing satirical or particularly incisive about The Devil Wears Prada, but then again Thank You For Smoking managed exactly that yet failed in the drama department. This is an admirable piece of entertainment, easily accessible, glossy and stylish to look at, much like Runway Magazine.