After the horridly overlong The Aviator and the complete misfire of Gangs of New York, The Departed is like a breath of fresh air from director Martin Scorsese. Whilst not exactly a return to the movies that made him famous (Taxi Driver, Raging Bull etc), it is an intelligent and tightly woven thriller that never once slows down. 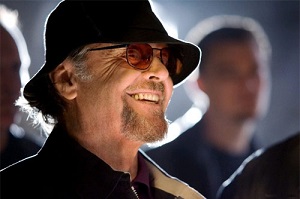 A remake of the Hong Kong flick Infernal Affairs (Mou gaan dou, which has spawned two sequels), The Departed doesn’t stray too far from the original. This is a blessing if anyone has ever seen the cop-out ending that was made for the mainland China release of Infernal Affairs – such a Hollywood remake could have easily made the same concessions. The Departed does screw up, but in such an infinitesimal way that it’s horrifying to think that a single shot has the potential to ruin a film (for me, anyway).

Leonardo DiCaprio has finally done something worthwhile again – I’ve felt he’s been treading water since Titanic (oh dear, two puns in three paragraphs… I’m on fire). His Billy Costigan is wound so tight that he seems fit to explode from the very first frame. As an undercover cop his life is consumed daily by paranoia, fear and guilt, not to mention constantly questioning his own identity. Costigan’s path crosses continually with Colin Sullivan (Matt Damon), a crim working undercover in the police force, even if the two of them never realise it. It was always such a great premise (however unlikely), and Scorsese lets the complications build up without ever letting proceedings get confusing. Matt Damon is rather unlikeable in this film, surprising only cos I’m used to seeing him as the hero of the Jason Bourne pictures. Then again he’s your best friend compared to Mark Wahlberg’s Dignam, and Alec Baldwin has some of the best lines as the sweaty Ellerby. Jack Nicholson walks around like he owns the place, as per usual, and doesn’t really do anything he hasn’t done multiple times before. Lesser known Vera Farmiga will be an actress to watch, even though her role (as one of the only females in this very manly film) isn’t really developed enough.

There’s been a lot of press about the deleting of a particular sex scene, and in fact the link between sexuality and violence seems to have been lost in the theatrical release. There are only a couple of references that hint at a theme that could have played a much larger role, but there’s really not that much contentious about the film. It isn’t even very violent – insofar as it hints at horrible acts but never shows them. I’m not suggesting The Departed should have been more graphic, just that there seems to have been a lot of fuss made over very little.

This is enthralling viewing, and perhaps even more so for people who haven’t seen the original. It feels like a return to form for both DiCaprio and Scorsese, and it seems the two can’t get enough of each other at the moment, combining their powers on the upcoming Theodore Roosevelt project.