Ryan Reynolds’ career has been on life support for several years… his natural charisma seemed unlikely to prevail against a succession of roles in miserable box office failures. Recent appearances in films like Blade: Trinity, Just Friends, Smokin’ Aces and Waiting… had all but doomed him to recede into the same twilight as former fiance Alanis Morissette. Surprisingly, he gives a potentially career-saving turn in Definitely, Maybe.

Reynolds is Will Hayes, an unhappy advertising man with divorce papers awaiting his attention and a ten-year-old daughter he adores named Maya (Abigail Breslin). Desperate to try to renew the spark of her parents’ love before it’s too late, Maya asks him to tell her the story of how they met. Hayes decides to describe the three significant women he has had in his life, allowing her to guess which one finally became his wife, and starting a long story of intertwining romances and heartbreak.

Reynolds is excellent in the lead role, and given the structure of the film he needs to be – one long flashback (formed by the story Hayes is telling Maya) dominates much of the running time and thus Hayes appears in almost every scene. He is charming (as he nearly always is), but also vulnerable and confused, with Hayes probably the most complicated role I’ve seen him play.

Support comes from Australian-raised Isla Fisher who continues to choose memorable roles that may well see her climb the ranks of supporting female actors. Her April grows and changes throughout the film, and yet Fisher never seems to miss her mark. Alongside Fisher, Rachel Weisz is vibrant as Summer, but neither Abigail Breslin nor Elizabeth Banks is given enough time or dialogue to establish herself as more than caricature. Additionally, Breslin suffers most from a script that often seems to be trying too hard to make her break audience hearts.

A major problem with romantic comedy-dramas (or dramedies) is that the genre is so immediately familiar that the mechanics of the story allow accurate prediction of the final outcomes, an issue that is even more important than usual in Definitely, Maybe. Given its premise of “which of these three women is your mum?” story, the film actively encourages the audience to participate in the ‘game’ and yet makes no attempt to mask what is really happening. Components are plugged into place throughout such that the final outcomes for these characters should be completely predictable, thus robbing the climax of its power.

Definitely, Maybe is better than many of its more recent peers in the genre, and the performances by Reynolds and Fisher in particular mean it is hard not to end up wishing for their success. Clunky moments in dialogue and transparent narrative mechanics seem mere quibbles when set against several genuinely moving scenes, leaving the audience with a contented smile at the end.

There’s no maybe about it, this is definitely one of the best romantic comedies I’ve seen in years. There’s a kind of stupid grin I get when a romcom is warming the cockles of my heart, and Adam Brooks’ film had me from hello.

Ryan Reynolds has always been instantly likeable. Will Hayes is the kind of schmuck that you can’t help but feel sorry for. As we learn of his rather bleak romantic history, it’s hard not to feel we’re being subjected to a biased retelling – he seems particularly hard done by. 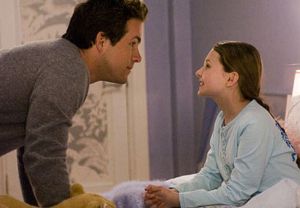 Thankfully, we eventually get to see some of his own mistakes, and it’s the flawed lovers that make for the best romcoms (think of High Fidelity, Chasing Amy or Eternal Sunshine of the Spotless Mind – pathetic humans in all of them).

This film goes to show that you only need a slight twist on an established genre to make a great film. Even some recent favourites (such as Garden State) feel awkward when they suddenly bring in the traditional narrative mechanics. With the ‘How I Met Your Mother’ plotline, the driving question isn’t ‘will they ever get together?’ but ‘what went wrong?’

There are a couple of problem with Definitely, Maybe, the most prominent being Abigail Breslin’s occasionally bile-inducing cutesy performance. For the most part she’s great, and it’s clear that Little Miss Sunshine was no accident, but on several occasions her exclamations are a little too much. The only other problems are minor, and easily eclipsed by that stupid grin I was sporting.

All the relationships in the film are pitch perfect. Apart from the three female leads, the supporting performances also shine. It’s great to see Liane Balaban (from a little-seen favourite of mine, New Waterford Girl) finally making her way into something big, and Kevin Kline is outstanding as the morally dubious randy old professor Hampton Roth.

If you’re after a top-notch romcom, this is it. Definitely, Maybe manages to be both a crowd pleaser and an intelligent film.