Everyone knows that it’s okay to brutally murder zombies. To callously dismember them limb by limb, shoot them in the guts and stab them in the face. Because, like, they’re zombies. It’s acceptable.

Everyone knows that Nazis are evil. And that it’s totally cool to shoot them, stab them, garrotte them. Because, like, they’re Nazis. It’s acceptable. 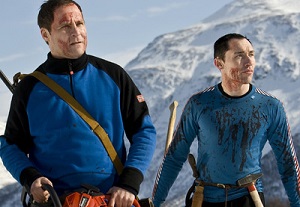 Tommy Wirkola and Stig Frode Henriksen have created an insanely enjoyable entry into the zombie genre, and one that doesn’t hold back one iota. They wear their influences on their sleeves (literally, in the case of one character with a Braindead t-shirt) and don’t waste any time rehashing that which just about everybody knows.

I was palpably relieved to discover that, contrary to tradition, the characters in Dead Snow HAVE SEEN ZOMBIE MOVIES BEFORE. For the most part, characters in such films seem to inhabit some alternate Earth where zombie flicks have never existed (curiously, this isn’t so often the case with vampire films – perhaps because there is a single identifiable book that ‘started’ it all). Imagine my joy when, faced with a zombie for the first time, one of our hapless heroes yells ‘Don’t let them bite you!’.

The plot is basic at best, but the writers knew this. As a group of twentysomethings make their way to an isolated cabin in the snow topped mountains one of them comments how this is exactly how most horror films begin. Soon after, when a stranger randomly delivers the back story concerning the evil lurking in the hills, there’s no excuse provided for such an unlikely moment, it just is.

The cast put in decent if unremarkable performances. Unfortunately, there’s a horrible lack of balance – the women are all pretty whilst the guys are unattractive (in terms of both personality and looks), so it’s hard to believe that there’s any sexual tension brewing, despite the evidence. They do strike a perfect balance between realistic and comedic responses – the early section of the film is surprisingly scary – and the dialogue never skips a beat.

When the action kicks in, Dead Snow is a non-stop gore-spattered roller coaster that never gets dull. There are some grisly moments that attempt to rival Peter Jackson’s first two films, though with a significantly larger budget. This easily has some of the best zombie ‘deaths’ ever captured on film.

There aren’t many films that can reference both Pulp Fiction and Indiana Jones in the same shot, but Dead Snow manages this with aplomb. An absolute must for zombie movie buffs, and anyone else in for some bloody good fun.