Of the crucial ingredients for any comic film, the most important must be humour. Add to that a sense of timing, and when to draw the line and move onto the next joke, and you’re onto a winner. Sadly, Date Movie possesses none of these qualities and the audience is dumber for enduring it. Alyson Hannigan and Adam Campbell play lovers who wish to wed – Hannigan to fulfill her lifelong dream of being a bride and Campbell just because – but are forced to confront the difference in their cultural backgrounds as well as Campbell’s former fiance, Australia’s own Sophie Monk (in a role she probably hopes will lead to her Hollywood breakthrough). This flimsiest of set-ups is fleshed out with such comic gold as defaecating felines, profuse body hair, and even several hobbits.

On almost every occasion, the humour of Date Movie misses its mark – in fact it is uncomfortably embarrassing at times. Scenes drag on and on, with seemingly no directorial input to suggest the joke has run its course, and one just has to wait it out. There are several true low-points, but the overall effect of the ninety-odd minutes is one constant low, and the truly abysmal moments fail to stand out from the background.

Eddie Griffin has been in his share of pretty poor comedies (Deuce Bigalow: European Gigolo and Undercover Brother the best examples), but this is below even him. He does, however, provide the only real spark in an otherwise drab affair, and not even the cameo appearance of D-grade star Carmen Electra can lift those around him to even acceptable levels of performance.

When it comes to the marketing of Hollywood films, we are often exposed to much of the best material in the trailer, leaving the experience of watching the film itself a disappointment. In this case, the abuse of the filmmaker’s trust that occured in the making of the preview is actually a boon for the discerning film-goer. Not only does the trailer for Date Movie reveal that the ‘best bits’ are actually extremely dull and uninspired, it allows one to choose to save their money and time and go see something else. I implore you, click the trailer link above, immerse yourself in the atrocious selection of ‘jokes’ and then recheck the cinema listings for something with more to offer.

It is hard not to understate how appalling Date Movie truly is. It just has nothing of value – from tired, worn-out spoofs of other films, to badly timed, inadequately edited sketch comedy, Date Movie fails on every level. A truly awful ‘film’ that does nothing for the artform other than debase it.

Gotta agree with Mark on this one. There are so many jokes that fall flat on their face. It probably didn’t help that Not Another Teen Movie already spoofed a lot of the prime targets, which means that Date Movie is relegated to a couple of recent flicks (The Wedding Planner, Hitch), a few classics (When Harry Met Sally, Pretty Woman) and bizarrely enough, some comedies (Wedding Crashers, Meet The Parents). Deciding to send up comedy is an interesting proposal, and only really works if you point out the flaws in the source material. In Date Movie they simply take the same jokes and go further with them, usually in the gross-out direction. 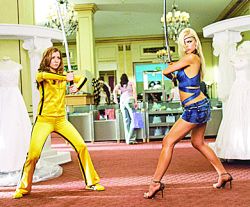 Alyson Hannigan is great in her first lead role, but the talented Adam Campbell seems terribly miscast, apparently only hired for his accent. The rest of the cast are fine, and ‘Buffy’ fans will recognise Tom Lenk in a brief appearance (taking off Lord of the Rings for some unknown reason). In fact I’d say most of the blame in Date Movie can be laid on the shoulders of the writers and director, as the performers seem to fulfil their roles rather expertly.

I did laugh a couple of times, but these were more often at random comedic moments, rather than any of the parodies. Mark mentioned the trailer ruining most of the setups of the film, which is true; however there were many moments from the advertising not actually included in the film. Whether through choosing different takes, or re-editing the scenes, there were at least a dozen shots I could remember that never made an appearance.

The film will most likely do well, mainly because of the mammoth ad campaign that has bombarded us over the past few weeks, but it is a pale imitation of such greats as Hot Shots or Scary Movie. The poster proclaims that Date Movie is by two of the six writers of Scary Movie, and that was apparent in the viewing, as it’s about two-sixths as good as the Wayans brothers’ film.