Dagon was the first straight Lovecraft adaptation I ever saw. I say ‘straight’ adaptation, but like many of the cinematic outings featuring the Elder Gods, Dagon isn’t completely faithful to the source material. First off, it’s an adaptation of ‘The Shadow Over Innsmouth’ short story rather than ‘Dagon’. 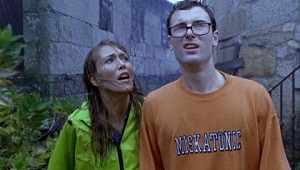 Barbara and Paul are boating off the coast of Spain when they become shipwrecked. They manage to get to shore, but find that the inhabitants of the fishing town of Imboca more than a little strange. Many of them are reluctant to talk and feature noticeable deformities. The whole place is rundown and it soon becomes clear not only that they shouldn’t tarry long, but their being here was no accident.

Strangely, this film is both ultra faithful and fairly loose in its adaptation. The setting and characters may have changed, however the scene in the short story where the protagonist has to lock himself into his hotel room (featuring some nifty home improvement) is almost a blow-by-blow recreation. In fact, that same scene was in the ‘Call of Cthulhu: The Dark Corners of the Earth’ video game, which is still better than any Mythos film I’ve seen.

Ezra Godden plays Paul (who bears a strange resemblance to Jeffrey Combs in Re-Animator), and whilst he’s a strong lead performer, it’s a pity that Stuart Gordon seemingly feels the need to add extra cheese to his films. For the most part, Dagon plays it straight, but then there are moments when it seems he has his sights set firmly on the B-grade. This is part of the problem with many Lovecraft adaptations – they’re not treated seriously. There are several moments that are practically throwbacks to the days of Re-Animator (I’ll get to reviewing that film soon) and the gloriously silly horror comedies of the 80s. As I say, Dagon is a strong enough film that it doesn’t really need distractions like this.

The production values on display here are great. The location is beautiful and the sets are decent (even if the props often feel over the top). 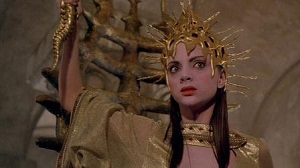 The film moves at a cracking pace, too. It seems as if the filmmakers couldn’t quite decide just how threatening the mutated inhabitants of Imboca are – sometimes they are unstoppable, at other times Paul merely seems to be knocking over a bunch of stunted homeless people. The film does get bonus points for hilariously using samples of dolphin cries amongst their inhuman wailings, however.

Dagon really does get Lovecraft’s atmosphere right, and Imboca is a great substitute for Innsmouth. There are some great prosthetic effects (and some not so good CGI), but overall this is a great Mythos adaptation. To quote my better half, it’s R’lyeh good.