The film Czech Dream is a documentation of a large scale hoax. Two university students Vit and Filip managed to convince thousands of Czechs in 2003 that a huge ‘hypermarket’ was going to have the grand opening sale to end all sales. The only catch was that the hypermarket didn’t exist. Through a massive advertising campaign and some very clever media manipulation the two created a buzz based on nothing. 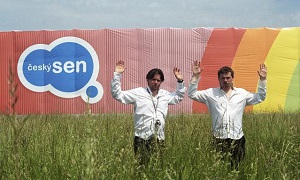 This is basically The Yes Men, except with a narrower scope and bigger budget. The filmmakers are certainly more successful in their outcome (as evidenced by the current affairs debate examining the hoax featuring the Czech Republic’s prime minister), although Vit and Filip don’t have a charm or the bravado of The Yes Men. When confronted by the victims of the scam they look rather frightened and somewhat ill.

They are much better filmmakers than they are face-to-face conmen, and their creative talents are very strong. The two went at it hammer and tongs with a full-scale marketing and PR campaign that was wonderfully effective (and included a tear-jerking commercial jingle that had the audience cackling with laughter). Czech Dream is very well documented, some of the ‘scenes’ perfectly captured, making one wonder exactly how many takes they recorded to capture the moment cinematically.

In a broader sense the scam tapped into the national consciousness and its concerns about joining the European Union. Many people reacted by comparing the media campaigns of the Czech Dream hypermarket and the government’s ‘vote yes’ campaign. In this sense they were very successful as people started/continued to ask the hard questions of both themselves and the government.

The doco doesn’t shy away from showing the negative impact of Vit and Filip’s actions, which to a certain extent leaves the audience to decide whether what they did was a justifiable social experiment or simply an exercise in making people look stupid.

A brilliantly executed and entertaining documentary.

←Pretty Persuasion Land of the Dead→