Cry_Wolf is the latest in a line of low budget horror movies getting general releases (Saw, Cabin Fever), and it is technically quite a well made film, especially considering its US 1 million dollar budget (although apparently there were a lot of donations made for the film as well). Jeff Wadlow jumped through a number of hoops in order to win the Chrysler Million Dollar Film Festival and direct his feature, and the finished product is certainly impressive, even if it fails on the whole. 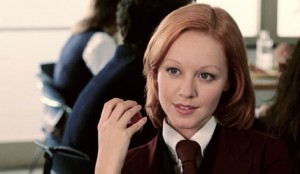 The cast is fantastic – all of the ‘students’ at the high school have a wonderful rapport with each other, and their performances bounce off each other perfectly. Lindy Booth (Dawn of the Dead) and relative newcomer Julian Morris are the standouts in the most significant roles. Booth in particular gives a riveting performance, so confident (yet mysterious) as the eccentrically named Dodger. Jon Bon Jovi also does a decent job as an English professor, sporting a tweed jacket complete with leather elbow patches.

The use of modern technology is something that sets this film apart from other recent horror flicks. Mobile phones, SMS and instant messaging all feature prominently in Cry_Wolf, and the film has proven that the advent of mobiles hasn’t heralded the end of the horror movie genre, nor that you have to resort to ‘damn, can’t get a signal’-like moments.

The main problem with Cry_Wolf is that it’s a little hard to believe. The premise is okay, even if the rules of the ‘game’ are a little hazy, and from that point on many of the ‘twists’ are rather obvious. They try to cover up such holes with some zippy editing and arty filters, but the flaws are rather apparent nonetheless.

The denouement is disappointing, particularly when it rips off a montage and music cue from Saw. Cry_Wolf is definitely a case of style over substance, and it’s such a pity that all involved were let down by a lacklustre script devoid of any charm or wit.

←March of the Penguins V for Vendetta→