It’s weird for me to realise that I’m not actually that big a Guillermo del Toro fan. Don’t get me wrong: I await each new film of his with anticipation (err, except maybe Pacific Rim 2), and my hopes are dashed each time one of his projects gets cancelled (The Hobbit, At the Mountains of Madness, ‘Insane’, ‘Silent Hills’). And yet the only DVD of his I own is…well, Blade II. That’s not to say that Blade II is a better film than, say, Pan’s Labyrinth, but just that it is more successful at doing everything it sets out achieve. For the most part, I love del Toro’s imagination, and I admire his artistry, but I’m left underwhelmed by the finished product. 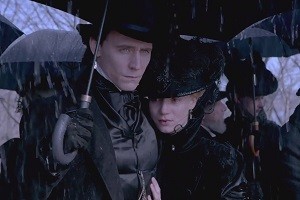 So with that said, it probably comes as little surprise that I found Crimson Peak to be lacking. On the surface, it’s great. Mia Wasikowska, Jessica Chastain and Tom Hiddleston in a period ghost story? Awesomesauce! An absurdly colourful visual style that’s reminiscent of Argento? Fantastic! At the end of the day, however, we’ve seen this all before.

Wasikowska plays Edith Cushing, an aspiring author who is still getting over the death of her mother many years earlier. When she meets the enigmatic Thomas Sharpe, she’s swept off her feet by his dedication and ingenuity, despite her father’s (Jim Beaver) dislike of the man. She soon joins Thomas and his creepy sister, Lucille (Jessica Chastain) at their ever so bizarre mansion.

The mansion itself puts up more red flags than the opening scenes of The Others did. There’s a hole in the ceiling through which autumnal leaves constantly rain? Open plan living! The blood-red clay beneath the ground seeps up through the floorboards? Renovator’s dream! There are some rooms that I am never, ever allowed to go into? Practical! ‘Zif I have time to visit all of them anyway! This ridiculousness is actually easier to swallow than in the case of The Others, because Crimson Peak is such an absurdly stylish film. This is 100 per cent del Toro, so the stylistic flourishes aren’t really flourishes at all; they’re the entire film.

The thing is, Crimson Peak is also predictable. It doesn’t help that we’re privy to information that’s withheld from Edith, so that we have to wait for her to figure out what’s going on. With regards to the horror, there are some genuinely frightening moments, but they’re almost all jump scares.

Wasikowska is excellent as always, whilst Hiddleston does his best in a problematic role. 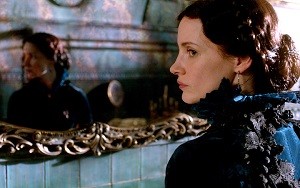 It’s Chastain, however, that really impresses, mainly because it’s a side of her I haven’t seen onscreen before. She plays the icy and untrustworthy Lucille with glee, and the performance is miles away from the strong yet taciturn women she played in Zero Dark Thirty and The Martian.

As always with del Toro’s work, we get superb visual effects sequences. The film features a lot of CGI, but the creature performances – whether they be motion capture or otherwise – really impress, and there are some great ghouls on show here, even if they have little relevance to the bigger picture.

Crimson Peak is yet another del Toro film that is both wondrously creative yet narratively ordinary. If you’re sick of low budget horror, then this big, bold and colourful production may well hit the spot. I, for one, am still waiting for del Toro’s best film…

←Sleeping With Other People Paranormal Activity: The Ghost Dimension→